And Finally, the Flooring 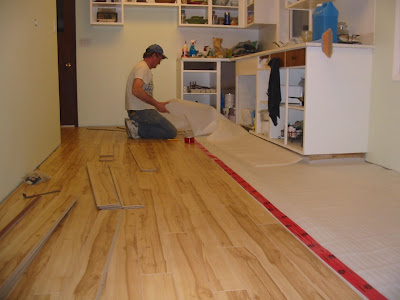 Look what Scott did!

It's true what they say about laminate flooring though. It may be relatively inexpensive, stand up well, and look pretty, but it shows every footprint so that when the sunlight shines on it, it looks dirty.

We thought we'd risk it for several reasons, one of which is that there is natural light only from north-facing windows in the room where we put it, and I thought maybe footprints would be less likely to show up so much. But no -- wrong again.

The other reason was that Scott was still talking about enlarging the dining room someday, and so the flooring would need to be replaced anyway. We got such a good deal on this laminate that we figured it wouldn't hurt us too badly if it had to be torn up.

Just finishing up the morning's work and will put in another couple hours, then head for Kelvington to deliver Grandma's Christmas present. Found a really nice set of wool hat, scarf and matching gloves, all of which she needs. She doesn't go out much, but the hood of her coat is so large that she always complains, when she pulls it over her head, that she can't see. Even the thin little leather gloves that she used to have have gone missing. And the headscarves she wears tend to be thin silky material, not anything warm. So we'll get her fixed up.
Posted by Blondi Blathers at 12:36 PM 1 comment: