Scott asked this morning if I'd like to go to the greenhouse and pick something out that he could buy me for Mother's Day. I'm not his mother but he has been trained to spoil me anyway. I'd far rather have the frigging closet door installed in our bedroom! But I will take whatever I can get, and flowers always make me feel good.

When I got home from the farmers' market yesterday, Emil told me he had managed to reach the pull chain on the ceiling fan in the bedroom so he could watch it go around. And he'd show me, if I liked. Which he did in the evening as I lay in bed reading. He was so thrilled about this that I pulled out the camera to catch his giant grin. That failed but at least you can see his intense concentration here: 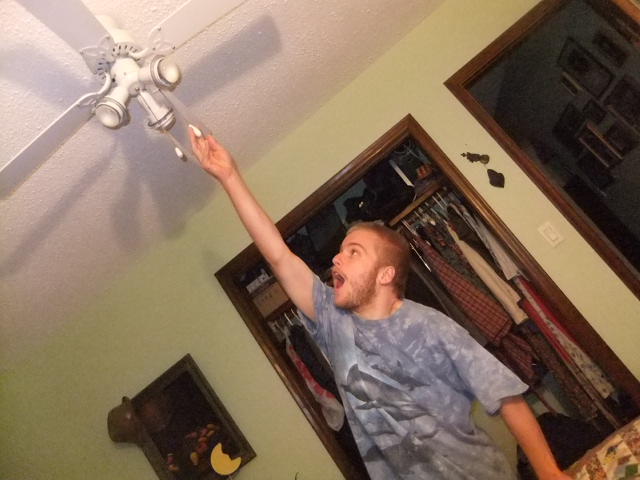 Emil has always had a thing for fans. Lots of autistic kids do, apparently. He's only been diagnosed as "borderline" autistic, but has quite a few autistic traits. Recently I mentioned a specific date some years ago, and out of the blue he told me it had been a Thursday. Why did he know that, I asked; had something special happened on that date? No, he said. He just knows what day it was. He's pulled specific days out of nowhere before, but this time surprised me because there seemed no reason for it, no particular occasion or event to trigger the memory.

One year, his uncle Russ gave him a ceiling fan for Christmas. At the time Emil wouldn't let us install it in his bedroom. He was afraid of it, he said. Last night he reminded me of that and added that he no longer fears ceiling fans.

He has lost a lot of weight in the last two months due to a naturopath's suggestion that he alter his diet to exclude foods made with yeast, dairy, and sugar. Out went the daily sandwiches and toast; goodbye milk and cheese; arrivaderci ice cream and cake. He complains about this and thinks maybe he'd rather not follow the naturopath's directives, which were given because Emil's sensation of his ears feeling plugged (he can hear fine, and they have been cleaned by a doctor and are not actually plugged) are likely caused by excessive mucous in his eustachian tubes and sinus.

There has been no change in the plugged-ears situation yet, but his acne has cleared up and he's gotten skinny. A lot of salads will do that to you, I suppose. He assures me that he is getting enough to eat and is not hungry after meals. But he hopes that when he has a followup visit with the naturopath a week from now, he will be told he can stop following the diet. He is going to be disappointed.

It was a slow market day, according to the vendors at nearby tables, but I loved spending the time with my sister and chatting with all the people who stopped by our table. There were some I hadn't seen in years. That alone made it all worthwhile.

Of course I am thinking about Mom and Grandma today. If your mother and grandmothers are still among the living, you are very, very fortunate and I envy you. Make the best of your time with them, while you can. Make sure they know how important they are to you.
Posted by Blondi Blathers at 10:15 AM 1 comment: