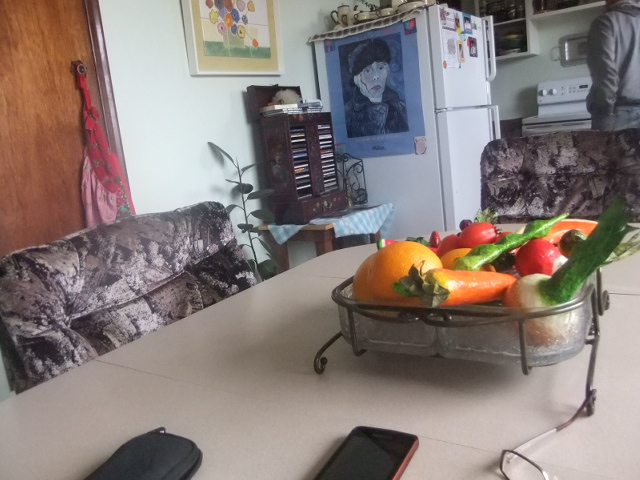 This dining room set is about 20 years old, a hand-me-down from Mom and Dad. I had it shipped out from Kelowna after Mom died, when Dad decided to replace much of their furniture. The upholstery is still as good as new, so it seems almost wasteful but ... I want to have them re-covered with a lighter, solid colour. They remain the best kitchen chairs ever; the rollers still work like the dickens. Like I said to Morgan yesterday morning when he sat down in one of them and exclaimed about it: when we get company and sit first at the kitchen table, we rarely make it beyond and into the living room. You can sit in these chairs for hours and be perfectly content.

Something I want to get rid of is the paper fruit! But I refuse to throw it out; it's too cute, with its stems and leaves and all. A bigger challenge is finding a place to store away the veggie-and-dip tray now holding some of the paper fruit (and real fruit). I bought it some years ago and have never used it for its intended purpose. It just takes up space we don't have right now, with the kitchen cupboards full and the basement torn apart. No closet can take it; we need every inch of counter space that we have; it's just in the way and serves no useful function.

We had a rainy day earlier this week and Scott was going to tackle the water pump and replace the toilet, then ended up not doing it, so it still takes half an hour to run enough water for a bath, and to flush the toilet you have to pour a gallon of water, collected from the bathtub spout, into it. We don't find this a hardship, really, as there's just the two of us during the week, but thought Doc and Morgan would be more comfortable in a hotel where they could at least have a shower and sleep on good-quality beds. It seemed to me these things would be important to anyone travelling as much as they are from place to place.

It turned out that the hotel where they ended up (because the better one —we have two in town — was full-up with hunters) was not very welcoming (beds not particularly good, owner making a loud ruckus in the hall because rooms had been rented to them when he had other plans, coffee pots in rooms in such bad shape they couldn't be used)(they weren't complaining, but gave an honest answer when I asked for a report)(have you seen enough brackets yet?) so they might have been better off out here anyway. Next time through, I told them, we will put them up here. Surely by then Scott will have the water problems sorted. Right? It is to dream.
Posted by Blondi Blathers at 9:53 AM 2 comments: