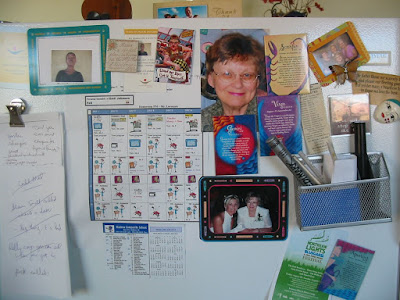 It's been a wasted day, to be honest, unless you're someone who believes sleeping is a good way to pass the day.
I woke up feeling pretty sprightly at 9 but by 11:30 was exhausted from doing nothing and crawled back into bed for another short snooze. Then woke up tired yet again and decided a walk in the warm wind and sun might fix me up. It didn't. By the time I got back in I was doing that thing you do before you empty your guts -- you know, where you're hot and cold at the same time? That thing. So I did what was called for, took a pill, and slept till 7:30. Now I'm rarin' to go! What's on the agenda for Saturday night? Not much. We'll probably watch a movie. The best part of that might be eating potato chips and sipping on gingerale. My life is so exciting.

Everett had to go out and rescue a garter snake from Chloe Doodle this morning, and when I was out in the afternoon there was another one crossing the lawn and Chloe was barking and pouncing at it. I didn't have the nerve to pick it up and deposit it elsewhere but Chloe listened when I told her to leave it alone, so I was impressed with her. Another dog I used to have, Annie Doodle, when she saw a snake would roll on it until it was dead. That was lovely, as you can imagine.

Have I mentioned that her hair is growing back in? Yeah, so that's a good sign that maybe, just maybe, she has beat this demodex thing. Although she still has bloody, raw patches of skin, so maybe she hasn't beat it. She's got an appointment to be spayed on the 27th but I need to take her to the vet first, to see what he thinks. If he doesn't agree that she's got the parasitic infection beat, we probably should put her down before the mosquitoes and ticks get bad. The former were out today, I'm told. I don't want to put my doggie friend down, so I have kept hoping and giving her every chance. Her diet has been modified to include vast amounts of raw beef and bones over the winter (our yard looks like an above-ground graveyard; it's gross), and we're making sure to buy kibble that doesn't have colourings and preservatives in it, and I even made herb tea to boost her immune system and mixed it with the dry food; she licked that right up.

I was in bed by 9 last night because my Mr brought the screens up and put them in the windows, and I could lie there listening to the frogs croaking and singing. There must be thousands of them in the slough behind the house; it's absolutely wonderful. I just lie there and smile, and smile, and smile. I love the sound. And wonder why it is that some frogs croak, and some sing. Or do they all do both? Must see what I can find out.
Posted by Blondi Blathers at 10:00 PM 1 comment: