Alison Pick's memoir Between Gods is about her study of Judaism.

Pick's father's family lost many members during the Holocaust and, in his life in Canada, he didn't practise his parents' religion. Pick herself, though, as an adult, is drawn to it. She signs up for classes given by a Jewish rabbi, begins (with her willing and supportive spouse) to practise Jewish rituals, and looks for a Jewish friend. She tells her readers a bit of the history of her murdered grandparents and cousins, and struggles to acknowledge the effect of these horrors on her own life. She feels it is somehow part of her — or she must make it so. She must honour it and mourn it and try to understand it. She also sees a therapist, Charlotte, to help her cope with a longstanding depression. 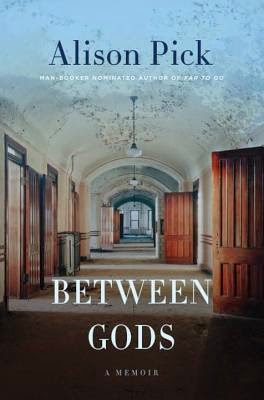 "I ask Charlotte my questions about change. Her answer is a resounding no. People can't change their essential selves. But what they can change is how they relate to themselves. And that makes all the difference.

It's early on a weekday morning, mothers walking their kids to school along the leafy residential street outside Charlotte's office. She looks fresh, her hair still damp from the shower. 'I can't stop thinking about evil,' I say.

I tell her about little Eva on that cold morning in Auschwitz. Five years old. Pulling up her sleeve, clenching her milk teeth against the pain of the tattoo. Trying not to cry. This is the detail that has locked itself in my mind, the detail I cannot forget. 'Is evil archetypal?' I ask Charlotte. 'That kind of evil?'

I expect she will say yes — Jung's framework is her framework —but instead she is silent. 'It's not useful to try and understand it,' she says.

It is perhaps the most honest question I have ever asked of anyone. I am entirely childlike in my desire to know. How can I make sense of a world where this could happen?

'You could try to imagine what they would want,' Charlotte says.

'What who would want?'

'Your dead relatives. The people who were killed.' She coughs. 'Your great-grandmother Marianne.'

I look at her blankly. 'But what is evil? Is it an impulse in all of us?'

I think of my university courses in social psychology, the famous studies where subjects, many subjects, could be goaded into delivering larger and larger shocks to a victim until the shocks were purportedly big enough to kill.

'The Holocaust must have been imagined by sociopaths and then executed by unthinking followers,' I say. 'And the depressed economy, people hungry and willing ...'

'It makes my own suffering seem ridiculous,' I say. 'Like, like ...  I am searching for an apt comparison, for something without the cliché of "a grain of sand" or "a speck of dust."

'Your suffering is also valid,' Charlotte says. 'Talking yourself out of it only gives it more power.'

I think that my suffering is a shard of their suffering. Again the clichés.

'There's one thing I know,' Charlotte says. 'They would not want you to suffer.'

But I resist. If I don't suffer, Eva will be forgotten. The small girl with her stuffed mouse in the freezing cold barracks in Auschwitz. My suffering is, I realize, a perverse kind of tribute.

'Think of it in reverse,' Charlotte says. 'Would you want her to suffer for you?'

It occurs to me then — comes over me in a wave of feeling — that there is a light that shines on all things. That shines and can never be extinguished."