(Dad, you were asking how much snow we've got.)

The birds are already displaying courtship behaviour, which is when they flit around showing off to each other and don't notice there's a window in their way.

Gorgeous days for walking, though.

The RM has made these snow ridges in the field to help keep the roads from blowing in. Not that there's been any danger of that so far this winter. 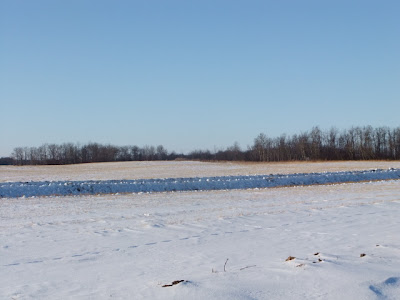 It's nearly one o'clock. Perhaps I should get dressed and think about what I'm going to do for the rest of the day. Have polished off several cups of black coffee and eaten toast with peanut butter. Emil slept in, too, and had a bowl or two of puffed wheat cereal for brunch. An hour ago Scott headed up north with his parents to visit his sister near Flin Flon so it's just me and my boy, who says he's happy to get me all to himself for a change. As if the two of us aren't usually here alone while Scott's off working somewhere, even on the weekends.

I was up late last night, watching TV. There was a one-hour program called A History of Scotland, and then I watched Marketplace, and then a Hercules Poirot mystery.

There's no Scottish blood in my ancestry that I'm aware of, but I still find myself drawn to the history of Scotland, as I am to that of England and Ireland. Perhaps there is Scots somewhere in the genes from way far back; who knows, right? You never really do. The gene pool we know of on both sides of my family contains English, Irish, Norwegian and Swedish. But you can never know for certain who else may have contributed way back in the generations and where they came from. And then there's reincarnation and unconscious memories from other lifetimes. Anything's possible.

Last night's Marketplace was about misleading labelling of food in the grocery stores here in Canada. None of it surprised me much; I already know that if I want to eat decently, I have to start from scratch in my own kitchen. For a long time I've walked down the aisles of the store in town and -- well -- not bothered. Cookies? I make my own or do without. Cereal? Make my own or buy only puffed wheat; most everything else, except maybe Muffets, is chockful of sugar and godknowswhatelse. Bread? I make my own. Juice? I buy fresh fruit instead, except for orange juice, because oranges are such a pain in the ass to eat. Meat? Scott raises his own beef and poultry and buys pork directly from a farmer. Flavoured yogurt? No more; it's full of sugar. Frozen french fries or pizza? Nope, make my own. Not that I "never" buy any of the above, but now it's only when weakness gets the best of me.

All of which requires more time in the kitchen, and I don't want to spend half my day feeding us, but there's no doubt that simple, plain homemade food is the best way to go. Now I only wish I had someone to cook for me, because I'm not all that interested in food, to be honest. I can pretty much live on toast, granola, and the odd egg.

As for the Poirot mystery, I knew who the murderers were right from the beginning, but still enjoyed watching him figure it out.
Posted by Blondi Blathers at 1:25 PM 4 comments: