Emil and I sat side by side on the couch last night. The lamps were on, the TV was not, and we chatted.
I asked him if he liked that I was leaving the string of Christmas bulbs up all year. Indeed, he likes that.

This week I had coffee with a friend  from 'way back in the day' and the first or second thing I said was probably "OK catch me up on the last 30 years of your life — in the next half-hour."

Trying to tell someone who's never met him what Emil is like is not that easy. Which made me think that showing how he gets around the house is one way.

***
Usually I respond to each comment as I see it, but alas this efficient habit has fallen to the wayside lately. You will have to forgive me. I will reply when I think of it now, instead of going back to find it. Every one of your comments is like receiving a little gem, though, I have to tell you. Don't think it isn't.

***
When I'm a millionaire with a housekeeper, I will have the walls wiped down everywhere Emil has left his handprints.

***
WWW, those bowls and the stand are from Princess House, which my sister Karen used to sell. The company has gone out of business now. They are intended for serving crackers and dips if I remember correctly. I've never used them for that. I've never actually used them much at all. Right now they sit by the porch door with (in the top bowl) an opened roll of five-flavours Lifesavers that we don't touch, and in the middle bowl I've dumped a bag of those chocolate Rolo candies. The third is empty. Candies are expensive! and not good for you anyway.

***
Lori, we've got a big yard -- a farmyard -- and there's dog shit all over the place here too. It's why I say that after our two dogs are no more, I don't want another one. (Though last night I caught myself dreaming about the blue heeler I'd prefer if we were looking for a farm dog.)

***
Lorna, re the neck things, maybe I need to accept that the condition is something that must be lived with, not something that can be treated and healed. Like a diagnosis of bi-polar. After 27 years ... I give up? But am still going to get wild raspberry leaves and make tea with them every day ... can't hurt. They are a hormone balancer and that may be the bottom line here.
So I say I'm giving up,  but really I'm not.
Where do I get this inexhaustible fund of hope?

***
When Everett moved out, he left behind this huge folder containing his Art 30 homework. It's been between the wall and my desk for some years. I need something to protect the archived newspapers that I'm carrying home from the office, so the folder has been called into service.
First it had to be emptied, and I discovered several interesting pieces. Joan, I can imagine him developing serious skills. Here's perhaps a self-caricature done when he was in Grade 12. 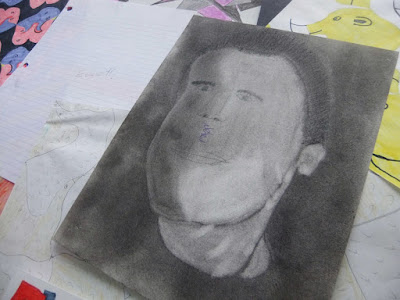