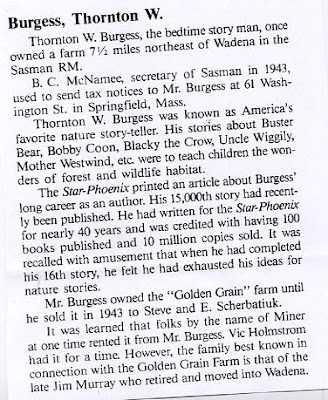 When told that Thornton Burgess had named Golden Grain Farm, I did an internet search. There wasn't one place where Saskatchewan was mentioned related to Burgess, and the Thornton W Burgess Society had no record of him being to this province.

The excerpt shown here is one of three in the two-volume history book of this area, titled Remembering Times. The others are write-ups from families that have occupied the farm, and they had similar things to say about its history.

According to the people we bought the place from (Scherbatiuks), Mr Burgess used to come out in the summertime.

Along with its balconies and verandas, a notably large three-storeyed farmhouse is long gone, replaced by a cookie-cutter '70s bungalow and a dip in the front lawn where the old foundation once stood.

Posted by Blondi Blathers at 8:30 PM No comments: