The End of a Life 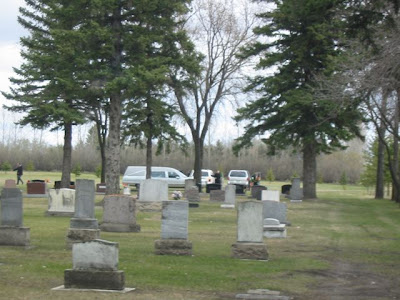 We attended the funeral yesterday for one of Scott's father Ivan's oldest and dearest friends.

After the service at one of the two funeral chapels in town, we joined the procession of vehicles to the cemetery where only the family and close friends attended. Then we headed to the community hall for a mid-afternoon lunch and some visiting.

Alec Bajbula (pronounced BaBOOla, if I've even got it right) was 30 years old when he was the victim of an industrial accident that kept him in a wheelchair till the end of his life. He was in his seventies when he passed away last week. Wheelchair or no, with the help of his little firecracker wife Sylvia he farmed right up until last year.

He had a nice little silver half-ton that would pull into the yard and, if you didn't notice him out there right away, he'd phone you in the house so you'd know to go out and see what he wanted. Ivan and the boys sometimes gave Alec a hand on the farm and Alec helped them out in return by allowing them the use of some of his machinery. But often he was just looking for Ivan so they could have a visit without Alec having to make his way out of his truck, into the wheelchair, and up the ramp to the house. The ramp, of course, must have been built instead of steps so that Alec could get easily into the house.

But mostly, when I think of Alec, it will be sitting in his truck with a smile on his face.

When Scott went out to check the cattle this morning at 5:30, the thermometer read —3C.
Today the sun is shining and Sonnyboy and I are off to the garden. Scott's got Devon, my old friend and Scott's unofficial brother-outlaw, with him and they are going to do some work on the house today. Yippee!! The furnace-replacement screwups are a story in themselves and still going on, but at last it looks like the weather is cooperating and Scott can make the most recently received wrong part work. One of the sheds is sheltering our new windows, some $4000 worth, and Scott wants to start putting those in too.

My "hack" sounds pretty bad, according to Scott's mom, but I am thinking it's nothing compared to the fever and sinus issues I was dealing with before that. I'd much rather be coughing and am sure it's just a matter of time before that's nothing to worry about either.
Posted by Blondi Blathers at 11:25 AM No comments: