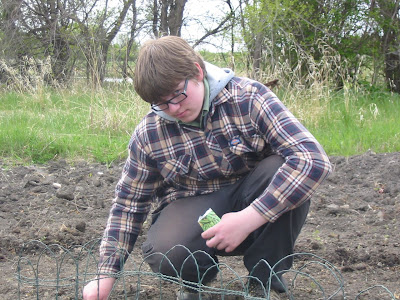 He Who Must Not Be Mentioned On My Blog planted his garden last weekend: sunflowers and peas.

Today he'll sow radishes, spinach and green onions, and transplant the lonely canteloupe. He thinks it won't bear fruit without another plant of its own kind though.

Casper didn't even think about following the van when we drove out of the yard a few minutes ago. Looks like the pup for company has done the trick. Fingers crossed.

I put a cardboard box on its side near the house and plumped an old quilted blanket, one used to cover garden vegetables in the fall, inside it, and Chloe was immediately contented and spent the night there. Not far from Casper, but not too close either or Casper growls and barks at her. At first I was a little worried —Casper is scary when she snarls—but she doesn't bite the pup, only gives her fair warning that her chest is not to be jumped upon and her territory is her own.
Posted by Blondi Blathers at 11:20 AM No comments: