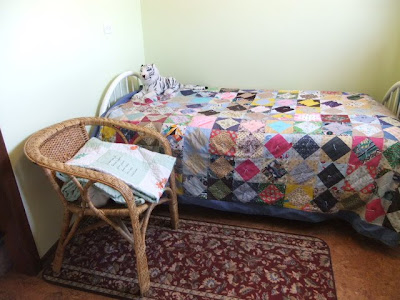 This is as maudlin as I am going to get.

Everett and I stopped in at Emil's new home yesterday after supper, with things for his new bedroom wall: a whack of plastic hangers, a laundry bag (full of his dirty laundry; god I'm rotten. he will do it himself mind you), and two bags of BC peaches and cherries for the kitchen.

He was spooning out the last of a big bowl of jello, and had been talking the ear off the group-home supervisor. The news he was most excited about was that the house has two showers and so he's been able to shower. We only have a tub on the main floor of our house, and an improper handrail to get to the shower in the basement, so he hasn't been able to use it.

One of Emil's favourite excursions is a trip to the Co-op store, where he can walk the aisles in hopes of running into someone he knows. We were headed there for a few things but he didn't want to come along, since I intended to pick up "only about three things." We wouldn't be there nearly long enough for him, apparently.

It's more likely that he was tuckered out after his first two days of full-time work.
Posted by Blondi Blathers at 1:38 PM 3 comments: