End of the Work Week 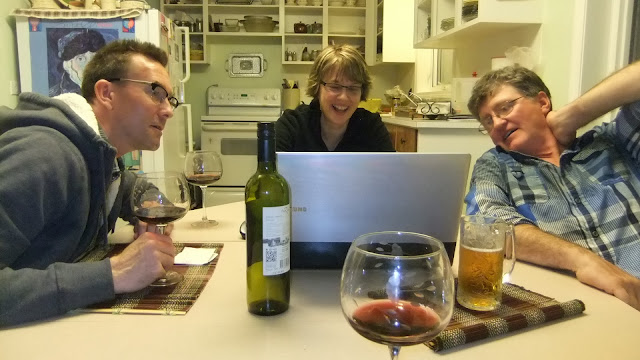 Scott's cousin Bev came out for supper last night with her husband Paul (on the left).

Scott got his laptop out so she could show us some family pictures online. Well, sort of. She was actually showing us this huge wild boar shot by her nephew, who was very proud of his hunting success, but we figured it looks more like a domestic pig that escaped its confines, and were chuckling about that. To be fair, her nephew was in at least one of the photos.

After the bottle of wine was empty, we polished off the last of my delicious chokecherry liqueur before they headed back to Kuroki, where they are living in her late parents' house. Bev is teaching at the elementary school in Wadena and Paul is looking for work in the area. They've just moved here from Ontario.

There were a few funny stories about their experience coming to live in a small rural community from a more densely populated urban one. Things are definitely different out here. I thought (of course my brain is smokin' now that I'm working at the local newspaper) stories like that would make a hilarious newspaper column, but Bev pointed out that she was raised in a mining town not much bigger but definitely more isolated than our little agricultural villages here in Saskatchewan. She and her sister grew up at Snow Lake, Manitoba. "I am definitely not a city girl!" she said.

Bev's parents are Lily and Maurice Evans; Maurice's parents Lucy and Charlie lived in Margo when I was a wee girl. They ran the café before Bill and Gerda Eskowich turned it into Bill's Diner, the inspiration for the fictional Stubblejumpers Café.

Reta and I watched the Margo Centennial DVD when she was here, and on it there is  footage from a number of weddings in the 1950s. Bits of my parents' wedding is on it, and so is that of Bev's parents. Reta said she thought Bev's mom was the prettiest girl she ever saw.

I lent my DVD to Bev to see it for herself, but it has been stalling so she hasn't had the satisfaction yet.

Kim McLelland and I also appear for a few seconds. We are three years old, pulling the gift wagon at Joanne Otterdahl's (Bohl) wedding shower.
Posted by Blondi Blathers at 9:22 AM No comments: