Men on the Go 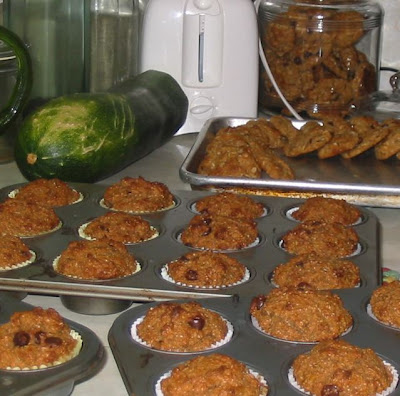 Sending them off with finger food.

It's so cosy: rain pattering on the tin chimney, the fridge running, me in Mom's thick plaid housecoat at 11 a.m., having been woken by a phone call an hour ago.

I was up around 6:30 when Scott and Everett were scurrying around trying to get out the door to meet their travel companions in town before 7. The air was a bit hot though, with Scott cursing because he hadn't finished packing last night before going to bed, and now couldn't find everything he wanted.

Poor Everett, I thought, he'll be regretting inviting Mr Cranky along, right now. I peeked my eyes over the ledge next to the stairs and looked at my son standing next to the door. "Is it safe to come up?" It may be evil to chuckle at Scott's expense when he's having a hissy fit but sometimes there is no better way to respond, either.

The call this morning was Scott, still taking care of business from the road. He is working on construction projects committed to last summer and every day he turns down a new job or two. His work is stacked to the ceiling and a "holiday" did not fit into his timetable. On the other hand, he desperately needed a break because when he is here he eats, breathes and sleeps work; there is no escape from the gotta-do's. This may do him good (a change is better than a rest? why.am.i.doubting.that) and, since the kids will be sleeping in a tipi and the weather is not fit for camping, at least I know Everett isn't going to freeze to death on Scott's watch.

I don't know if they'll go to any museums on this field trip; their time might be taken up by eco-tours, hikes and such. But at a museum or zoo I like Scott to be my companion. He notices everything there is to see, while if alone I pass right over half the fascinating details in a display. Everett will benefit from Scott's sharp eyes and attention to detail.

I hope that by now he is chatting with the five teenagers riding in the van (he's left me his half-ton) and, though driving, is getting into a holiday mood. He'll be sleeping in the van tonight, which may be more comfortable for an old fella like him than the hard ground under a sleeping bag. I'm not sure what state he'll arrive home in, but my fingers are crossed he comes back rested and refreshed. It's a tall order, considering he'll be on the go for three days with a group of kids.
Posted by Blondi Blathers at 11:05 AM 4 comments: