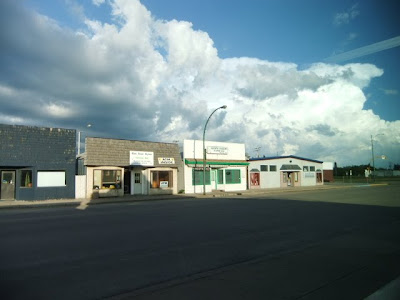 One evening we had supper at one of the three (four if you count the bakery) cafés in downtown Wadena, and watched an ominous cloud roll past Main Street.

Last night we were up till 3 a.m. because lightning was cracking nonstop all around the house. There was a steady rumbling that went on at least three hours, and Casper Dog took out another basement window screen and bent the frame irreparably before we got outside to tie her up away from the building. "We can't keep an animal that's wrecking our house," is something we are both thinking. She'd better smarten up. This is the third screen she's ruined. We will be lucky if no rodents got in before we discovered the first one with a hole in it (shiver up my spine), and if it happens sometime when we're not here ... it could get ugly. Right now the windows have to be left open in order to dry out the basement as much as possible. The dehumidifier tells us the relative humidity down there is some 88%. We may be fighting a losing battle.

For a while there I thought we might vamoose to Everett's bedroom in the basement to sleep, since he's away, and in case of a tornado. There have been some in the vicinity over the past few days and this lightning was unusually persistent, and accompanied by cold and wind.

This morning we awoke to sunshine and sultry heat.

Apparently Saskatoon had four inches of rain in less than an hour and there were a lot of flooded basements. The pump in a hole in the cement floor in our basement just keeps on a-pumpin', bless its wee heart'ie. Knock on wood.
Posted by Blondi Blathers at 9:37 PM 4 comments: