Not Music to My Ears

I've turned the TV on to a Toronto (due to the time difference) radio channel so I can listen to the program Q on CBC with its new host while I measure and mix this week's batch of bread, which is earmarked for Everett's deep freeze.

They've just played a long performance by the Nunavut woman who won the Polaris Prize this year for her throat-singing. Compelling (one word for it) as it may be, I don't consider it music (others may; whale song is considered music, of its kind). The throat-singing I heard this morning sounded more like what comes out of our bedroom on a good night when there are no kids in the house.

Nothing convinces me that rap "music" is music, either, since I discern only rhythm and no melody.

Musically uneducated it may make me, but I stick to my own definitions, even as the rest of the world passes me by and rap is now mainstream (really?) and Inuit throat "singing" wins the country's most valuable prize for music. To me, these are emperors who are wearing no clothes. I don't consider Leonard Cohen's "sung" poems to be music, either.

As it is, now when rap comes on the radio, I turn it off. I do the same to advertising and to sports reports. They only irritate me.

Maybe someone can help me see/hear/experience this in some other way?

For instance — this kinda relates — someone else's perspective changes everything:

I use a machine to knead my bread.
Something happened to the bottom of it so that it rocks itself out of position, across the floor, knocking on the kitchen cabinets. My effort to put a stop to that has been to set the pot on a pair of oven mitts on the floor. That helped, but didn't solve the problem. The pot still moved.
So this morning I asked Scott for ideas.
"Set it on a rubber mat," he said, just like that. "Like a bath mat."
We don't own such a thing, but there is my yoga mat.
Worked like a charm. Now why didn't I think of it! 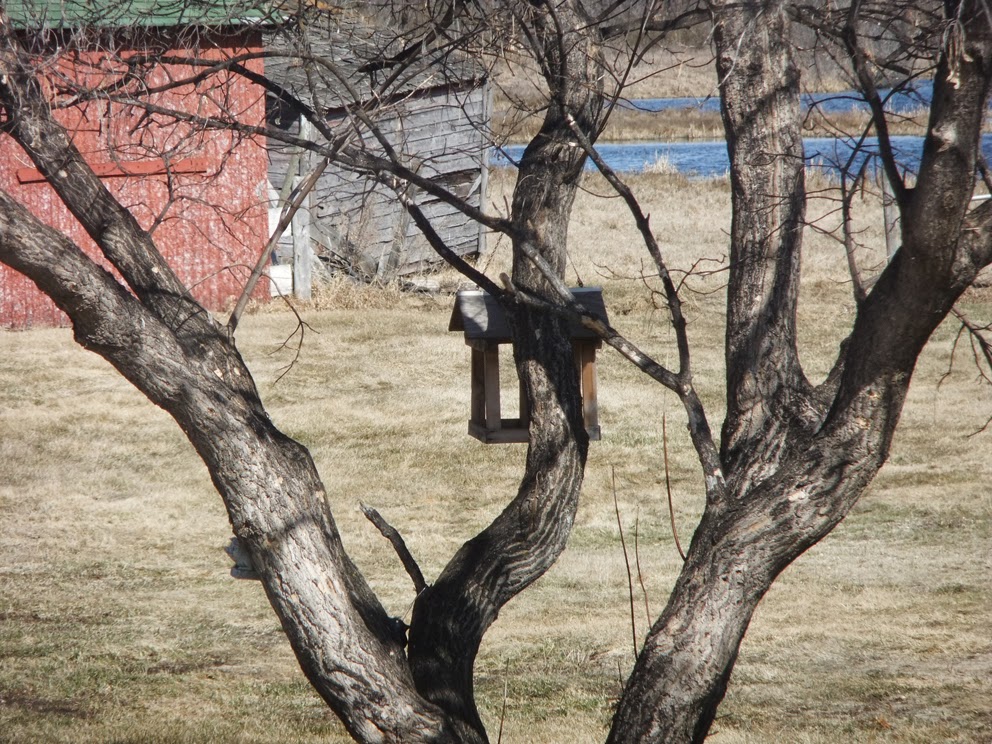 After dropping Emil off at Aylesbury House after supper last night, I stopped in at Everett's to drop off some mail. He was grating cheese onto his meal of pasta so I didn't stay long (nor was I invited to!) but as I turned to leave, he said, "Oh! I got something for you."
What could it be? What could it be? I wondered as he strolled over to his back porch. He came back carrying a large wooden birdfeeder.
"Bought it at a garage sale. Thought you'd use it."
And he is right.
Posted by Blondi Blathers at 10:37 AM 8 comments: