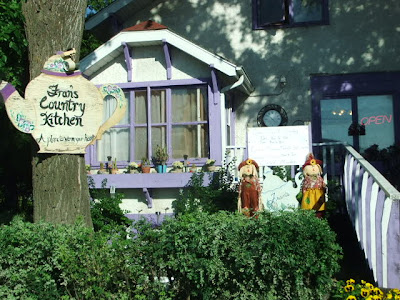 It was Scott's turn to take supper to his grandmother who, at 102, still lives in her own home in Kelvington. This meal delivery by family members (she gets Meals on Wheels for dinners during the week) ensures that Grandma doesn't have to use her stove anymore, and it forces Mr Busyness Himself to take time for his gran on a regular basis, which he enjoys and so does she.

We're in the middle of a serious heat wave out here, as in most places across the country if I'm hearing the news right. Our house remains delightfully cool during the day if we keep the windows closed, so I felt safe to put a ham roast in the oven yesterday. But that was as far as I was willing to go. I didn't want to push our luck by turning on the stove burners to boil potatoes and steam vegetables, nor did I want to cook them at Grandma's and boost the temperature in her house trailer up to 100 degrees. So I called Fran and we picked up a delicious potato salad and some hot baby carrots on our way to Grandma's house.

No wolves were seen, but coming home we had the pleasure of observing a fox pup making itself at home in the middle of the road. I was not quick enough with the camera to get a decent photo before the little darlin' skidaddled into the long grass. 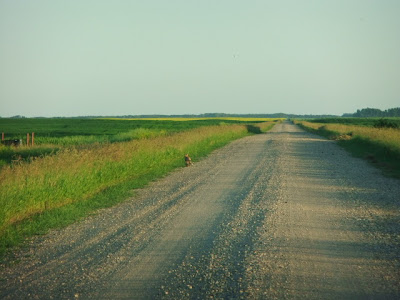 My brother-in-law Gary had his scheduled angioplasty today. All is well and he's to be released from the hospital tomorrow. We came a little too close to losing him—shocking thought—I mean, what if he hadn't had the good sense to get himself to a hospital? What if he'd been out in the boonies, too far away to get there in time?
Anyway, we can now get off the pins and needles of the past few days.
Posted by Blondi Blathers at 10:29 PM 1 comment: