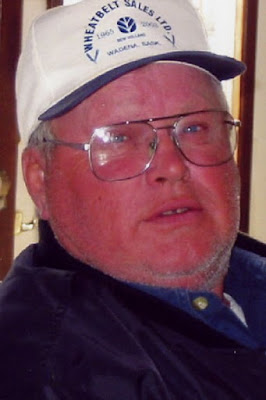 Bruce's obituary was to be brief; there would be no rhapsodizing about his heroic qualities either in the obit or at his memorial; he wanted everything to be down to earth and factual — no weighting of his earthly existence on the side of saintliness. "He wasn't perfect," my aunt Shirley said, as we sat down to put the obit together. My reply: "He almost was!" He could sound gruff, but he was a gentle man; he never hurt anyone, to my knowledge; he took care of his family and I am pretty sure that anyone who ever needed his help got it.
He was 15 years old when I was born and although I was likely teased and playfully roughed up as a little girl, my Uncle Bruce always treated me right as I grew up. When he started bringing his girlfriend Shirley out to Margo on weekends, they never came without chocolate bars for me and my younger siblings, which of course made their arrival much anticipated. It was Uncle Bruce who started my Christmas gift-buying habit. When I was in Grade 3 and sister Karen was in Grade 1, he gave us his year's collection of pocket change, which filled a tobacco tin or two. We'd work and save to add to it so we could afford presents for all the family, and we had a lot of fun finding the perfect gift for everyone. When we were a little older and Bruce and Shirley were married (we sang Whither Thou Goest at their wedding, wearing short matching blue fortrel dresses that Mom sewed for us, with ruffly white blouses), Karen and I were invited to stay with them in the city during summer holidays. They'd be at work and we'd play their Hey Jude Beatles LP and walk to the neighbourhood pool on hot afternoons and I'd terrorize my poor little sister if she didn't do just as she was told; she probably still has nightmares. Years later, after I'd left home, weekend visits weren't complete until I'd driven out to Bruce and Shirley's farm for a cup of coffee with them. I don't think either of them has ever said an unkind word to me and after 51 years, that's a pretty decent record.

Archie Bruce Benson was born in Wadena on June 27, 1943, and passed away at the age of 66 on Feb 27, 2010, in the Wadena Hospital.
Bruce was the eldest son of Doris (Bartley) and Emil Benson and was raised along with Grace, Reta and Neil on the family farm eight miles north and two miles east of Margo. During some winters the family lived in town and the hotel patrons got a kick out of little Bruce, who, sent by his dad to encourage a certain gentleman to come back to work after dinner, would use some colourful language.
After graduating from Margo School, Bruce studied drafting at the Saskatchewan Technical Institute in Moose Jaw and then worked for the City of Regina. While living in the city he met Shirley Scott, a Foam Lake girl transplanted to Regina, and they married in 1969. After several more years in the city they purchased the farm next to Bruce’s childhood home and made it their residence for the next 35 years. There they raised their two children, Karla and Gerald, and farmed until moving into Margo in 2008. Over the years Bruce also worked for Doug Domeij and for Wheatbelt in Wadena.
Bruce volunteered with the Emergency Medical Service in the City of Regina and after moving home, sat on the boards of the Sask Wheat Pool, the Margo Community Club and the Margo Co-op. Some of his favourite pastimes were hockey, fishing, camping and hunting, and he loved old cars.
He was very good to his kids, and when they had children of their own, Bruce was a delighted grandpa. His smile showed off the Bartley gap between his two front teeth — a trait shared by many of his close relatives, including his granddaughter Gracie.
Bruce was predeceased by his sisters Naomi (who died in infancy) and Grace, and by his father, Emil. He is survived by his mother, Doris; brother Neil (Rose) Benson and nieces Heather, Jolene, Leanne and families; sister Reta (Carl) Morris and nephews Nathan, Damon and family; brother-in-law Don (Grace) Johnson and Kathy, Karen, Cameron, Joan and families; wife Shirley; daughter Karla (Dallas) Dareichuk; son Gerald; and grandchildren Tristan, Gracie and Paxton. He will also be missed by Marley, the little dog Bruce called “Fluffy.”
Bruce would be pleased if donations in lieu of flowers were made to the Margo Hall.
Posted by Blondi Blathers at 11:10 AM 3 comments: