Who's in the Doghouse? 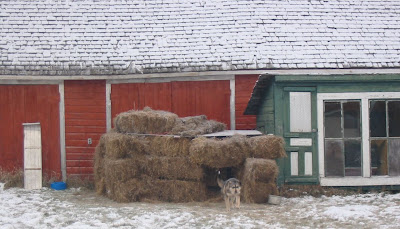 Chloe gets up and stretches her legs before bounding toward me.

I'm on my way out with a bucket of water in one hand and a bucket of dog and cat food in the other. A heated blue dish sits next to the new doghouse setup, so that their drinking water doesn't turn to solid ice.
A gentleman in town builds animal shelters in his backyard workshop, and I asked him to construct an insulated one big enough for two German shepherd-size dogs that would, if they had half a brain, keep each other warm inside it. Within a week he delivered it, with a hinged roof so we can easily install a heat-giving lightbulb should we choose. Scott tacked a piece of carpet over the door to keep the cold air out.
Alas, the old dog will not let the young one inside so poor Chloe would lie outside the door, as close to the old dog as she can get, on top of some flax straw. She'd be covered in frost in the morning.
So the doghouse has been moved over beside the long shed and surrounded with flax bales, formed to create a central chamber for the pup, next to the door. From there a short tunnel turns into an entryway. There Chloe likes to lie during the day and soak up the sun. We fear that the old dog has commandeered the central chamber too and may not even be letting the pup that far in. Might have to build a duplex with separate entrances.
Dogs. Gotta love 'em but they can be a pain in the ass.