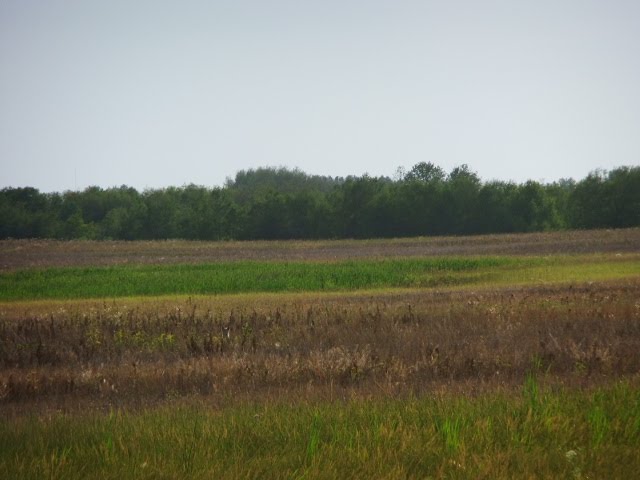 Look closely; you'll see the head of a coyote as it sits watching.

Somebody found Casper and I interesting while out on our walk the other day. For a moment it looked like he might come closer; it was as if he was sitting there thinking about it as he watched. And I walked backward, watching him, wishing he would, but remembering that even though a coyote has never been known to attack a person around here, it has been happening -- last year a young woman out hiking in Nova Scotia was killed by two coyotes, and someone in Manitoba had a run-in with one, too.

The bad news is, coyotes have killed a month-old calf and yesterday, I'm told, three of them marched down the road as if they owned it, turned in the driveway at South Forks (my handle for the family "complex" a mile from here, where we lived before moving to GGFarm; it includes a big white farmhouse), and went right into the yard where the house is, where the vehicles are parked, where the kids play, where from in front of the barn they dragged away another calf carcass.

Bold as brass.
The blue heeler, who normally would keep them at some distance, was cowering in the basement because it had been thundering.
Posted by Blondi Blathers at 12:14 PM 7 comments: