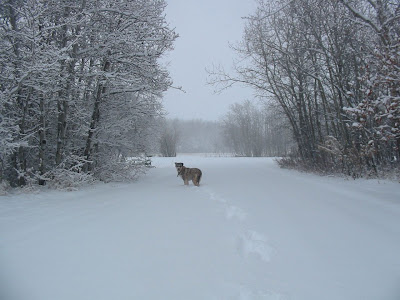 Chloe and I waded through the snow to the road, just to see how deep it was.

Sat23Jan/10
2:35pm
So much for my big plans to move Emil and his stuff over here to GGFarm today. By the time Scott left for the other house (Emil was there and we don't leave him alone overnight) late last night, a lot of snow had already fallen, and it’s been coming down hard and heavy all day. I went out a while ago to give Chloe her pill – which is pushed into a chunk of wiener (thank you, Faye: why didn't I think of that? it beats putting my whole hand into her mouth) — and discovered there’s been six inches of the fluffy white so far. It’s beautiful out there, but not the best for Emil to walk through. Scott just called to see if I want anything from town and said he spent the last two hours pushing snow out of the yard over there with the tractor. He’ll have to do the same thing here before it will be easy for Emil to make his way to the house. 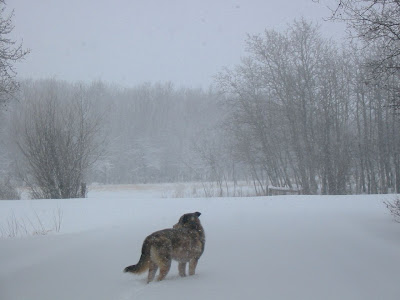 Hm. Not too inviting.

It’s a relief to allow myself to stay home and leave Emil where he is.
Everett’s cookies are coming fresh and furious out of the oven, so I’ve had some with some milk and made myself a pot of tea.
Scott came over yesterday morning, saying he didn’t have enough ambition to get any work done and felt lazy. For him it was a wasted day, although he did spend a couple hours trying to get the printer working after it’s sat idle since October, and he did sand the window casings in preparation for one last paint touchup. Before he went home to check on a cow that had been bleeding from her mouth and to try to reach our very busy vet, we agreed he’d come back here and we’d go to town for supper and groceries.

As always, we drove the entire length of Wadena’s main street before making up our minds which of the four open restaurants to go to. We chose the one that appeared through its front windows to have the fewest customers, and I went along with Scott’s idea to order two Chinese food dishes to share. They turned out to both taste about the same — and bland — so it wasn’t a satisfying meal; rather disappointing, instead. But we went to the grocery store on full bellies, which helped me resist the urge to buy potato chips, jalepeno poppers and chicken wings for easy snacks— they were all on sale, but I'm trying to be strict when it comes to convenience and processed food, and junk food. I did impulsively pick up Crispy Crunch bars from the 2 for $1.89 bin, and Emil thanked me not only last night when we dropped off some groceries over there, but we’ve spoken twice by phone today and he’s thanked me again, both times.

We hauled the bulk of the groceries into the house here at GGFarm and put them away, then poured ourselves rye and gingerales and pulled up to the table for a couple games of crib. At 11 Randy Bachman’s Vinyl Tap came on the radio, rebroadcast from last Saturday; when we’d had enough of cards, we reclined in our new loveseat in the dark living room, holding hands, and laid there listening to the show till it ended at one in the morning. 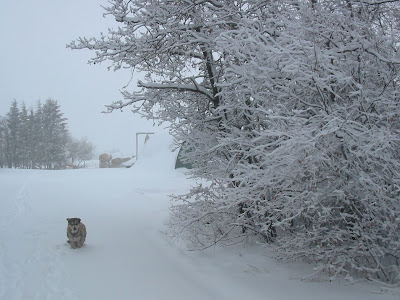