Stop My Waffling? I Think Not. 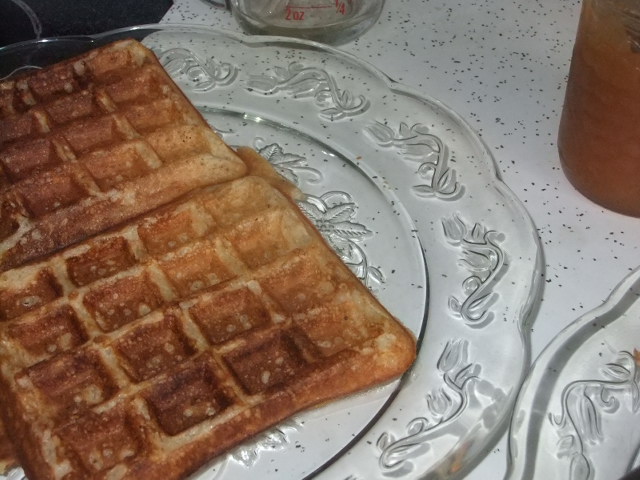 It may be hard to believe that at my age and after many pancake breakfasts, this is the first waffle I've ever made. And well should you not believe it, because this is actually the second one. The first one went straight down my neck, slathered in Shelly's homemade apple jelly. And was it ever delicious; I'll be getting into the habit, even though they're more pain in the ass to make than flapjacks.

We are still basking in near-zero temperatures so, on days like today when there's no wind, my walk is perfectly pleasant (I must ask Yukon Pete how he keeps warm on a dogsled, assuming he's stationary there, in the North's deeper cold. Even wearing fur ... Perhaps there's less wind so it's not so bad?) and, if I didn't have things to do, I'd add another mile to the usual two.

But we're looking forward to friends coming for supper this evening, so I'm going to tidy up the hovel, beautify myself, and make squares: Helen's Pink Lady Dessert. Making these always reminds me of our good neighbours back when we lived in Legal, who treated us like family and became fast friends. I'll take a stroll down memory lane while measuring and mixing.

Poor old Scottie, today, is messing around with the sewer pump when he had hoped to be doing his part in the kitchen. I know, I know ... with a new septic tank installed just a couple months ago, all that crap is supposed to be over with ... oh well, at least he's not slipping and sliding along the edge of a lagoon, and it's not 30-below. Yet. We hear forecasts that it's coming this week.

If I'm lucky, it'll all work out in the end (oh my but the puns are flying fast and furious aren't they) and I'll be soaking in a tub of warm water while he's peeling potatoes and preparing his specialty: stuffed mushrooms. Fingers crossed.