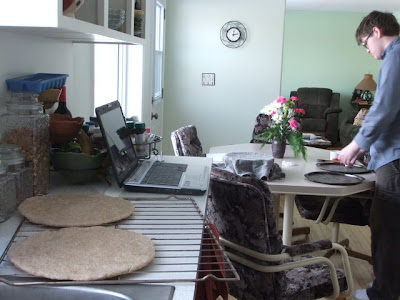 My boy finished high school, recently turned 18, and doesn't know what his next step will be. For now, he's home, feeling he's "not very mature yet" (his words, I understand) and wanting time to feel his way ahead. I'm all up behind that because, really, what is the rush? He's happy. I think this is the first time in years that he hasn't felt pressured by homework, and he's loving it.

It's not as if he lies about all day picking his nose, scratching his balls and playing videogames. He puts in four hours a day at whatever I assign. He's paying his room and board this way for now and, though I don't work him hard, I do work him. I haven't washed dishes more than once since the beginning of September. Tomorrow he'll probably clean the bathroom, since it's overdue and the young gal who agreed to do it for us every two weeks is stuck in town with a car that won't run and no money to fix it. Darn it. He'll hate that, but he'll do it. Not as well as Megan, but well enough. On Monday he made bagels. Sometimes I have to scrunch up my forehead for a while to think of jobs for him; that's what the list on the fridge is for, mind you. Yesterday in Kelvington I bought a couple frozen pizzas, as I usually do when they're on sale 2 for $10. I hate the damn things even if they do fill the hole; they taste like shit after you've eaten them too often and for too long. And I'm sure they're made of plastic.

Everett's pizza crusts are to die for, though, and healthy — 100% whole wheat. This morning a pizza crust marathon was my command, and he is hard at it, and loving it. He's listening to a favourite CBC radio show, WireTap, on his laptop, and laughing away as he mixes his dough on the kitchen table. It's taken me a few years to appreciate this program, but now we chuckle at it together all the time. I rant about how Jonathan should dump those so-called "friends," Gregor and Howard, and Everett thinks this is the funniest thing. "With friends like them, who needs enemies?" I always say.

He's just come into the office to inform me that, "You know I'm making all these crusts to freeze? Well I'm cooking one of them. We're going to eat one."
Oh yeah, I'm all over that.
He'll just put garlic powder and cheese on it, and oregano, and it will be our late lunch.

There was a documentary the other day about how kids don't leave home at 18 and stay away anymore, like they did (and couldn't do it fast enough, as I recall) when I was just finishing high school. They can't afford to now, apparently, due to the dearth of jobs and the cost of living. Me, I couldn't wait to have my own place and my own money and be in the city where I must have thought all the action was.

Everett is definitely not me.

He is not difficult to have around. In contrast, my parents were probably relieved to see me go.
Everett will do what he is asked, with very little fussing, if any. Me, at that age? Doubt it.

The bottom line is that I don't want to push him out of the nest. I want him to be ready to go on his own. He is not there yet. I'm okay with this; patience is the big lesson of my life; still learning it.

I am glad he's here, and I trust that he will strike out when there is an adequate beckoning. Surely at some point he will run screaming from his mother's house. Don't they all?

Check out this link on Everett's page; it's good for a few laughs. He wonders if the British would find the Canadian way of speaking as humorous as we find theirs.