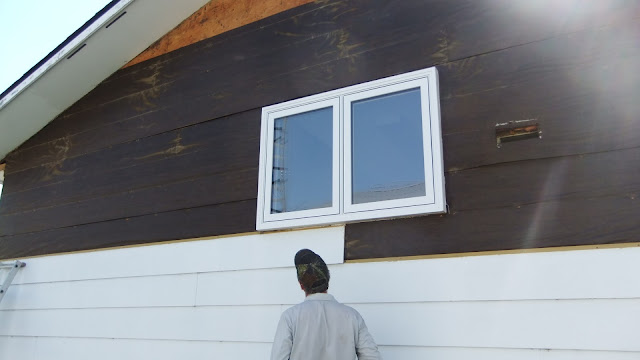 Today could be considered a day of rest, since I only had to be in town by 8 to pick Emil up and drive him to Camp Easter Seal down at Manitou Beach. It's been a long day, but compared to the two previous, it was Easy Street.

Yesterday and the day before were actual work days. I went with the boys to Kelvington to be the jill-of-all-trades while they prepared a house for new siding. I pulled out nails and hauled old siding away and stacked it and helped load it up and kept the site tidy and generally did whatever I was asked to do. They were two swelteringly hot days and even though they were short — we came home mid-afternoon so the boys could get out into the field, as it's haying time — I was asleep before 8 the first night, and not much later the next. And was still tired and sore in the morning.

I have a new admiration for the physical stamina of these two guys, who generally put in full days of heavy labour on the job and then come home and do farm work for several more. I'm not sure I'd survive.  I don't know how they do it.
Posted by Blondi Blathers at 10:35 PM 1 comment: