Gussied Up for the Wedding

It's the big day! Gunnar and Melissa are getting hitched.

I wore my three-inch-heel Clarks sandals (won by entering a contest on Schmutzie's blog; sheesh Elan, you seem to have a large influence on my footwear!) around the house for an hour or two every day this week to get used to them (since I hardly ever have reason to wear dress shoes). Things sure do look different from a higher vantage point; you've heard me say that before if you've read my blog a long time. Could this be why tall people seem more confident than short ones? Because the material world looks smaller and more manageable to them? That's my theory. 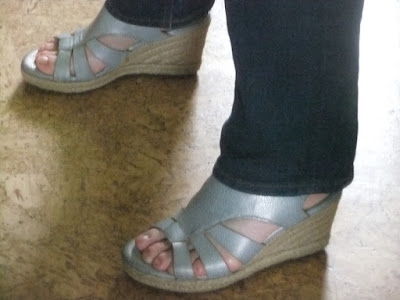 I tried on my black skirt to make sure it still fits well and it does, more than 15 years later, woo hoo! I think back to the lengthy expedition embarked upon to purchase this skirt, needed for a musical theatre show I was in. I must've gone to two dozen different stores and tried on three times as many skirts before finding one that hung right. And you wonder why I don't enjoy shopping ... . 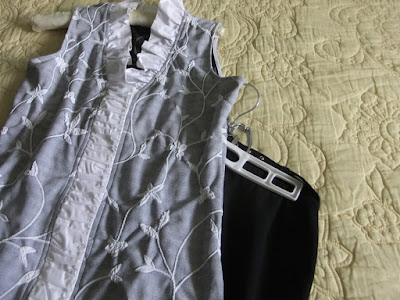 I brought along a black denim jacket in case it's cold in the hall — could be, if there's air conditioning and you're me — or if it turns out to be a cool day. And then there's the evening, which will definitely be cool. So I'll need it, sooner or later.

Here we go! It's going to be a long day. Let's hope everything goes off without a hitch, except for the hitching that is wanted by the happy couple.
Posted by Blondi Blathers at 7:00 AM 1 comment: