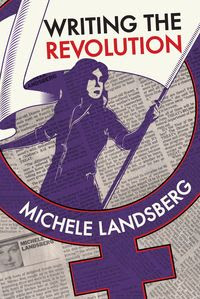 I'm off gallyvanting for the next 10 days, so to those of you whose doorsteps I won't be landing on ... see  you on the flip side! I may pop in and make an entry; but then again, I may not.

I'm leaving you with a recommendation for Writing the Revolution. If you think it hasn't been a struggle for the female half of our race to get and keep equal rights in this country, even in the last few decades, this book will make you think again. It will make your guts churn with anger and frustration, but it will also make you proud of the fight women have got in them. In US.

An interview with Michele Landsberg at More Magazine

Get it on iTunes

An Interview with Michele Landsberg

What central issues do you see facing Canadian feminists today?

The central issue facing women today is that we are still excluded from and underrepresented in every sphere of real power (banks, government, etc) and thus our vital concerns are ignored or trampled on, for example — high quality, universally accessible child care; universal access to reproductive choice; prompt and effective remedies for harassment, battering and other forms of violence directed at women.
I would say that the most grievous injustices are inflicted on aboriginal women and girls, and immigrant and refugee women. The poverty and harms they face are sickening and a disgrace to our democracy.

In your opinion, what news outlets (large or small) in Canada today provide valuable and vital points of view for readers concerned about social justice?

Among the news outlets that still care about social justice and provide the lively analysis and research one needs are: The Monitor, from the Canadian Centre for Policy Alternatives; Briarpatch; StraightGoods.ca, Herizons Magazine (one of the last feminist magazines in the country), Shameless, Rabble.ca.
Of course, the Star and the Globe and Mail occasionally do eye-opening investigations into issues of the public interest, and these are invaluable.
From Canadian Living
One of my favourite lines in her book is Michele's response to those who say that feminism is dead.

“Feminism dead? They said that from the beginning, and they were always wrong: Feminism is a passion for justice and equality, and that cannot die.”