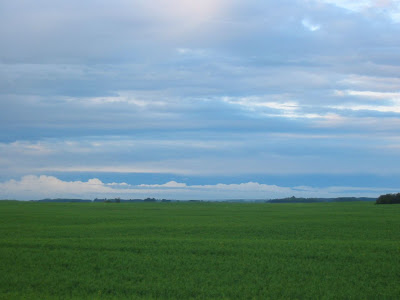 Who says Saskatchewan doesn't have mountains? See those white ones in the distance?

The dogs and I walked on the road north of our place one evening last week. There are fewer trees along the edges of the fields in that direction, so one can see for miles. I should be able to tell you what is growing in this photo, and probably could if I could see the field again, close up. But otherwise I'd be guessing. Might be wheat, rye, canola, barley, oats ... all common crops in this area. I'll need to take a second look.

We've had the rain we need; next we have heat on order. It's cool and grey today though and the forecast is for another inch of moisture. Scott and Devon got new insulation and soffits up on a gable end of the house yesterday; two sides done, two to go. I ended up missing the Re-mains concert because it was necessary to take a stronger pill and relax so that it could do its job. I was able to putz in the garden a bit but drive anywhere or sit in company, no, it couldn't be done—not when nausea is hovering above one's consciousness. I was on my feet again in time to make a bare-bones supper for the hungry workers but that was the extent of my accomplishments for the day. I'm not moving too quickly today either.

The three cats that we took over to the new place spend almost all their time hunting in the long grass outside the farmyard. The two young ones, which were skinny, now walk towards you with their bellies bulging. The rodent population must be taking a beating. One night the pup, Chloe, had a dead mouse in her mouth and played with it for hours, tossing it into the air and chewing on it. We figure one of the cats must have left it for her so that she'd stop trying to play with them, for a change. 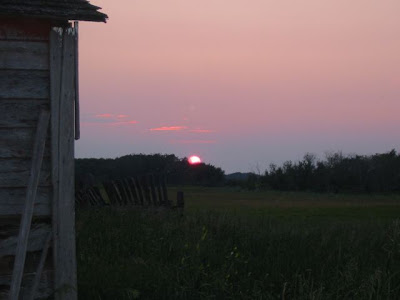 Three bulls were unloaded into the pasture a couple weeks ago and when Chloe caught sight of them for the first time, she took off at full bore in the opposite direction. She made it to the front step and then sat there craning her neck, pretty worried. Scott's got names for all three of them: Bennet, Knut, and Eugene. He may find them friendly pets, but their presence keeps me out of the pasture. I only go as far as leaning on the fence to chat with them when they're up by the barn.
Posted by Blondi Blathers at 3:31 PM 4 comments: