One of Those Nights

Everyone has them once in a while: a night when you go to bed tired, yawning, ready to snuggle in and fall asleep, and then you lie there awake until well into the wee hours.

I had left the office at 5:30 to come home and bake a chocolate cake for Scott. I'd cleaned the kitchen and waited for him to arrive, because we'd talked about it in the morning and decided we'd either go out for supper or he'd bring a pizza from Kelvington, where he was shingling his 106-year-old grandmother's garage roof.

But by the time he drove into the yard around 7:30, pizzaless, it was too late to run to town for supper. He'd need to bath first, and the restaurants close at 8 o'clock. So much for birthday plans! We sat chatting on the couch for a long while as he drank a cold beer (which I fetched; it was his birthday, after all), and then he went and lay in the tub for an hour with his iPhone. We ended up eating pork chops and fried cabbage sometime after 9 o'clock.

And then he tucked into that cake, two or three helpings of it, and turned on the TV. That's when I got my pyjamas on and got into bed with The Orchardist.  I'd enjoyed the first half of it but now, by the second half, I'm skimming through. Around 11 o'clock I put it down and turned on the radio to listen to The Vinyl Café and then As It Happens. Usually I fall asleep somewhere in there, but not last night. I was too warm, I was too cold, I was too crowded, I was — who knows.

It was just one of those nights. 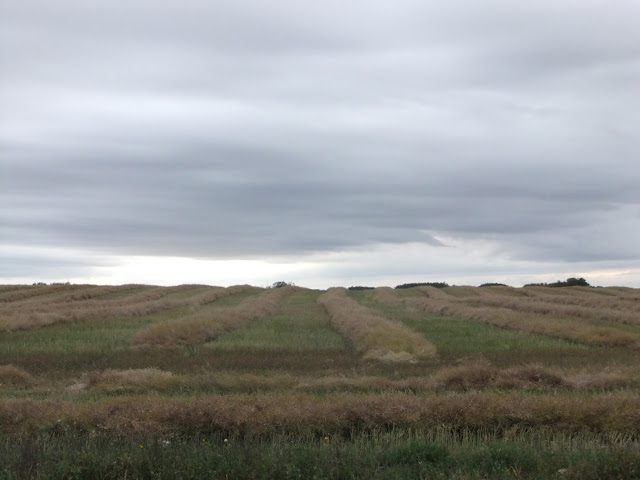 Posted by Blondi Blathers at 10:06 AM No comments: