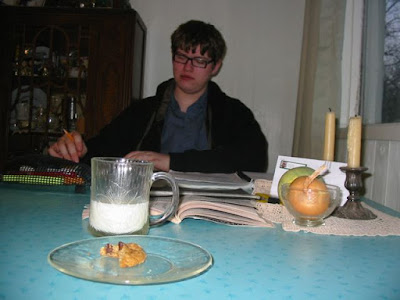 ~Mon night~
I worked here in the office this afternoon, then went home to make supper and work in the kitchen for a couple hours before coming back here (after a delay to watch the last half of Battle of the Blades; the skaters I liked least, won).
When I arrived at the house Everett hadn’t been home from school long. He was coming back from the barn, where he goes to feed the cats every day, and then pulled out his math homework at the kitchen table. He was in a talkative mood so I got a glass of skim milk and a couple of his fantabulous cookies and sat down to snack and chat.
He mimicked this kid in his class who mumbles so badly that Everett asked him to repeat himself about four times and still didn’t understand; another student sitting nearby had to tell Everett what he was saying: “Can I borrow your notes?”
I laughed till I cried. Literally.

***
Why is there an onion in a bowl on your kitchen table, you ask?
I got an email touting a raw unpeeled onion as the sucker-upper of flu and cold viruses. You're supposed to keep one by your bed and even in every room in your house.
Should have checked it out on Snopes.com, as it's not too likely that onions are a miracle preventive or healer. Thought it worth a try though; the worst that can happen is I'm out the cost of a bag of onions.

***
Kate, that gourd you gave me is still drying on the kitchen table.

***
To make it easy for him, the envelope for Scott's donation to the Lung Association is ready to go to the post office, awaiting only the tucking-in of a cheque.

***
Sudoku puzzle book: thank you Luanne, now Everett and I are both doing them.

***
Grandma Johnson's candlesticks, on a doilie she crocheted.

***
A cloth measuring tape I just bought so I can get the right length of Emil's inseam. Shirley, when I got you to shorten those pants for him, I overlooked the fact that the pair I gave you to figure length were also too long.
Posted by Blondi Blathers at 1:24 PM 6 comments: