Everett and I were on our way to town on Friday to do laundry and bring Emil home, when I spotted an animal at some distance making its way across a field. It didn't look right though, as it was shorter in front, as a wildcat might be, so I got Everett to drive toward it. It was a coyote struggling through the deep snow, with its front leg badly broken.
It could have escaped from a leghold trap, or been hit by a car, but it would only starve to death if nothing was done. When we got to town I went in search of someone with a rifle and gave him the coordinates. Felt lousy doing it, but would have felt worse if I hadn't.


After helping Everett haul the laundry into the laundromat, load the washers, add the detergent and plug in the loonies and quarters, I went to pick Emil up from work. He'd already left in the Mallard Industries van so I met him at the group home. This is Tracy, his primary aide in the group home. She's very good at her job, a real sweetie who likes to laugh and to tease Emil. She says he's starting to "get" it ... as Emil is a person who doesn't understand the concept of teasing and joking. He's a serious lad and takes every word at face value.

On Sunday morning when the phone rang and Scott brought it to me in bed, my first thought was that something had happened to Grandma. But it was my Aunt Shirley, telling me that my cousin Karla's husband Dallas had broken his back in a snowmobiling accident and asking me to drive her to Flin Flon to look after her grandchildren, as Karla went with Dallas in an air ambulance to Saskatoon and Shirley wasn't confident to drive up there.
So by noon we two were on the road, and I felt like I was covering the miles into my past. It's been quite a few years since I've lived in the Flin Flon area —about 24, I guess, or 25 —and around 7 we were unloading Shirley's bags into Karla and Dallas's house at Denare Beach. I stayed long enough to get a peek at Paxton and Gracie, who are in kindergarten and Grade 2, then toured the little village to see what houses I could remember. I managed to find one of the little ones I had lived in for a while, and then motored over to Scott's sister Laurel's place. I was standing outside my vehicle, parked in her driveway, when she and her beau pulled up, wondering what the heck I was doing there. She fed me a couple bowls of delicious stew and we chatted a couple hours before I headed back toward Creighton to spend the night at my old buddy Luanne's place. You may remember I visited her up north in the fall of 2009, when she was living at Rocky Lake, nearer to The Pas.
We squeezed in two hours of talk before I hit the guest bed and she went off to her own room, having to get up early in the morning and go to work. She was already gone by the time I got up, but had left me a note with her phone number at work, and her mom's, just in case I needed anything before I left. I don't know why, but that last part cracked me up. I found the tea, the toaster and the bagels with no problem and had no need to call Zedda for help. Cute.
Then I hit the icy trail.
I pulled over on Flin Flon's main street to show you the stack from the smelter; that white cloud is something, but not a cumulous cloud, and in the 20C-below cold it was making its presence known:


It was a great day for travel: blue sky, clear road, and CBC radio came in perfectly for all seven hours of driving. Can't beat that. Only one long icy gravel-road detour west of Preeceville, where they seemed to be repairing a bridge: 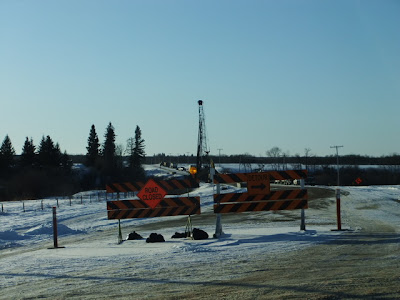 I called Shirley this morning to get an update on Dallas's condition. His back is broken in two places; all but two ribs are broken; he has a broken collar bone or shoulder bone; fluid in a lung; they were giving him an epidural this morning to stop his lungs from collapsing; they can't operate yet because his blood oxygen levels are too low; on Sunday he could still wiggle his fingers and toes; doctors were considering putting him on a ventilator; he's on morphine, in quite a lot of discomfort when awake.
That is everything I know. We wait and hope tomorrow brings him some relief and progress of some sort. We are also giving Uncle Bruce (who passed away Feb 2010) the credit for keeping his grandson Paxton safe, as the little fellow was on the ski-doo behind his dad when they hit an unmarked snowplow ridge on their way home from an afternoon of ice fishing. They both flew off the machine, which may have landed on Dallas, but Paxton was completely unhurt.
Posted by Blondi Blathers at 12:02 AM 9 comments: