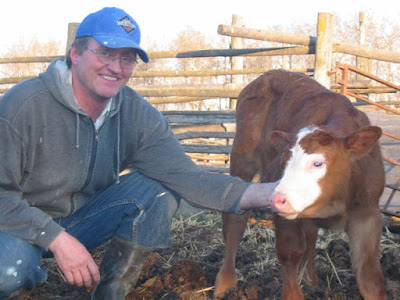 I turned down two invitations to go out visiting today, because I’m still coughing and blowing. But I didn’t have the heart to refuse the one that came from Scott after supper.
“Wanna bring the camera out and get a picture of me with this big calf?”
It was born today and is twice the size of most newborn calves, and Scott is tickled.
So I put on my winter jacket and a pair of shoes and followed him to the corral next to the barn. It wasn’t until he opened the gate and made his rubber-booted way across the thick, spongy manure-covered ground to a brown calf on the other side that I hesitated.
“You want me to go in there? With that mother cow eyeing me like she is?”
“She won’t bother you.”
“So you say. She’s not happy about something.”
“She’s telling me to leave her baby alone, and she wants him to go to her.”
“Yeah, well….”
Walk in shit up to my knees, and risk that cow coming after me—no problem. You'd think he'd know me well enough by now to realize—but no, apparently not.
“Are you going to take a picture, or not?”
By now the calf and its mother had reunited and the cow had returned to her feeding station, and Scott had followed and was wondering what my problem is and why I’m such a coward. Which I am; never doubt it. But I set forth across the crap, one eye upon that one-ton Annie, and snapped a photo for the man. He loves those little calves and it's quite endearing, really, to see him scratch their chins and heads and listen to him talk to them like pets. And they are cute and curious.

Last time he told me not to worry about cattle was a few weeks ago when he'd asked me to go for a walk in the pasture with him to "check on them." That was this spring when, as now, there are newborns and there are cows in labour most every day, and one has to be on top of the whole thing in case a cow needs help giving birth. I was reluctant, but went along, and was nervous as hell.
"Just stay close to me," he said. Exactly what I wanted to hear; it didn't make me feel any more confident.
Unfortunately, the neighbour's dog happened to be here that evening and decided to follow us inside the fence. We were in the midst of the herd of cows and calves when the cows spotted the unfamiliar dog and rounded on it. Their hooves hitting the ground sounded like thunder and I thought sure as shit we were going to be pounded into dust. It's not like that didn't scare me any.
Posted by Blondi Blathers at 8:02 PM 3 comments: