For several months since removing it from the lapel of a blazer, this fairy was pinned to the curtain in the bedroom.

Unfortunately every time I see it I think it's a moth, and jump because it's right at eye level and close to my face.

Not that I'm afraid of moths, but I'm easily startled. Over and over again by the same thing, apparently. You'd think eventually I'd get over it, but no. Finally I put the pin somewhere else.

It's early afternoon and Emil and I are looking forward to Scott and Everett arriving home in a couple hours. This is one of the faces that will greet them, poor buggers. Maybe I'll get my morning hair combed by the time they get here so they won't be too frightened. 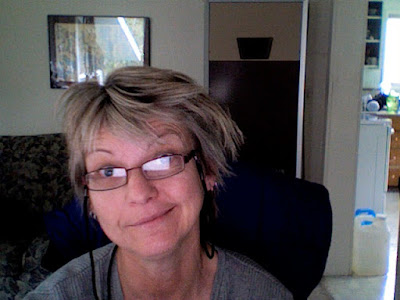