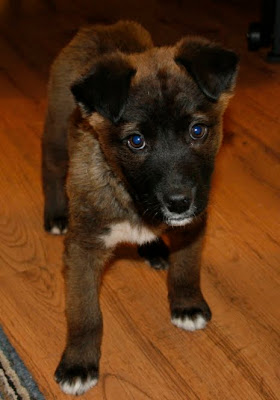 This little fella needs a home.

From his current caregiver:
"He is intelligent, playful but calm, quiet, looks before he investigates. Has started to play with a ball and is good to chew on a bully stick (or my dog's elbows) and not my stuff.
I've started leash work and he sleeps in a kennel. Quit crying after the first night. He can go up and down stairs but still hesitates a bit going up.
I named him Rooty Root Bear (Rooty) because if I had an orange t-shirt for him, that's who he'd look like!"

In northern Saskatchewan, as in many other places, people don't or can't spend the money to have their pets spayed. Often hungry pups as well as older dogs are left to roam the streets; they often pack up and become a serious danger to humans as well as other animals. Many end up at the pound and are put to death after several weeks.

There is a small crew of softhearted individuals (my sister Karen among them) that takes these abandoned dogs from the pound before the date of "execution" arrives, and makes valiant attempts to find responsible homes for them. Little Rooty here is one of the lucky ones; he's in his halfway house now and waiting to be adopted. And isn't he a cutie?
Posted by Blondi Blathers at 9:21 AM 3 comments: