A Sister in the Congo 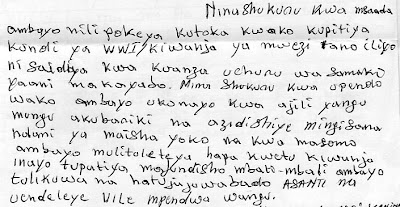 After five months I had given up hope of hearing from the young woman in the Congo whom I sponsor through Women for Women. Naomi is the same age as Emil, is married with three young children and has a niece living with her family. This week I got a letter. She tells me that my monthly contribution has helped her start a business selling salted, dried fish and is supporting adult education in the community. Her handwritten letter is accompanied by a translation. She says “God bless you and provide you more than what you have in your life.”

Emil is having a busy week. Bowling in Foam Lake on Monday night. A group trip to Regina yesterday for an overnight with shopping and a movie before coming home today. Tomorrow night a dance in Humboldt. I’ll pick him up and bring him out here on Saturday unless we move him into Aylesbury House that day, in which case he’ll probably want to stay there and get his sea legs before the work routine starts again on Monday.

***
Reply to comment:
Kate in NY, I don’t know why oil is so expensive here. Taxes? The government probably taxes the shit out of it, as it does with the gas we put into our vehicles.

3:55pm
Damn. I was speaking to a work contact in Regina about an hour ago, who said it is blizzarding in the city. The highway down there (the Number 1) is extremely treacherous in bad weather. I hope those in charge had the good sense to stay off the road. Recently we've had at least two tragic accidents in Saskatchewan due to poor visibility and less-than-ideal road conditions; one was caused by a 17-year-old who tried to pass another vehicle when she likely couldn't see oncoming traffic; she was killed, as were the two parents in the front seat of the vehicle she collided with. Their four children who were along made it out alive.
Posted by Blondi Blathers at 12:36 PM 3 comments:

Yes, this is really what the northern lights look like -- magical, beautiful, breathtaking. And you don't need the music to appreciate them ... the silence of a cold night is background enough to inspire awe of the heavens. At home here, the sight is often enhanced by the crying of coyotes in the fields nearby.