To all readers who call Margo their home town:

Can anyone tell me who is the author of this rather fine poem?
It is on two typewritten sheets of paper that are tucked between the pages of my History of Margo book.

I'll have to take another look through the history book, which probably gives accounts of the (apparently) three lumber yards that burnt, back in the day.

But if anyone can shed light on the identity of the poet, please do!

If you click on the images below, they'll enlarge for easier reading. 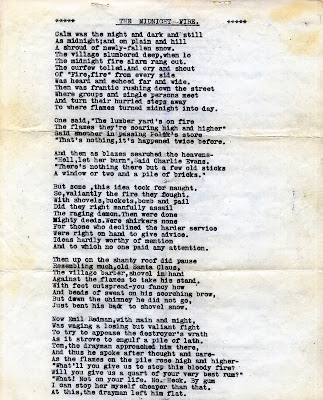 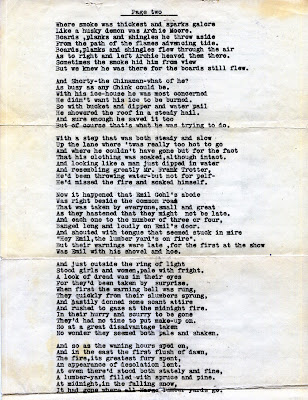 It does contain one politically incorrect reference to a person of Chinese descent.
In these small Prairie villages, there was often one Chinese family who owned and operated a café. It was commonly that way when I was growing up in the 1960s and '70s too and from what I can see, it's not that much changed now. All the restaurants in Wadena, for example, are presently operated by relatively recent (judging by their accents) immigrants.

Let's remember that back when this poem was written (what year? I wonder; I bet it's in the book, which I may not get back to, today), everyone who wasn't First Nations was either an immigrant or the child of immigrants, just as we remain today.

Many of those early immigrants came with nothing but what they could haul, and it was a hard life for sure. What some did have on their side, however, were friendly, helpful, welcoming neighbours who could make all the difference between survival and failure. Those who came before that met with friendly, helpful, welcoming First Nations people. If they hadn't, Canadian history would be a lot different.

Dad read my post on FB and phoned. Who wrote the poem? He doesn't know, but suggests I contact Elsie Peters, whose father took an interest in local history and maybe told some stories.
Dad told me that the fire would have had to be in the 1930s or '40s after Emil Gohl moved to town from the farm, after his wife passed away. Mr. Gohl had a shoe repair shop across the street from Kulcheski's Garage on Main Street. The shop flooded every spring and when you went there you had to wear your rubber boots.
He also remembers a retired schoolteacher who lived in a railway car (right where Olga Daviduk's house stands now) next to the lumber yard. She was pretty smart and could've written such a poem, but after her husband died she no longer spoke to anyone except the Daviduks, even when you spoke to her. McCrae was her surname and she would go around town collecting bottles.
Another clever schoolteacher he remembers was Mr. Harbridge, who also would have been capable of writing such a poem and contributed a lot to the Margo history book. He lived next door to where Dad lived with his own parents when the moved from the farm to town.
Thanks, Pop!

Charita: It could be Harbridge. However, I know that John Grand did a bit of writing as well as the 2 Fairburn bros. Jack and Ed. The Mrs Mcrae that lived by Daviduks was Tina McRae. She used to go around town with her wagon, collecting beer bottles.


Posted by Blondi Blathers at 11:22 AM No comments: