Let There Be Heat 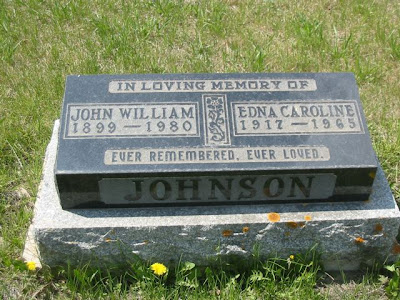 As well as visiting Mom's grave in the Margo cemetery, Joan, Jordan and I dropped in on other relatives.

Of course none of them were there, but their grave markers were. John and Edna are Dad's parents. Happily, I remember them well, though I was only seven when Grandma died from a heart attack at age 47. Grandpa lived till he was 81. He's the one who taught me as a child to play rummy and whist, and spent many hours playing these card games with me before I reached my teens. What patience he must have had. He kept chocolate ice cream, my favourite, in his deep freeze and was always so good to me. I've been lucky, the family I've had (and have.)

Glory Halleluiah, Golden Grain Farm now has a working furnace and HEAT!
We still need it too. Scott says the thermometer registered 0 degrees at 4:30 this morning.
I was able to have the bedroom window open a crack during the night and the frogs weren't even singing. Too cold.

I was uncovering seedlings and flowers this morning while a male American goldfinch followed me closely all around the garden and talked to me. At one point he nibbled on seed from a dandelion poof on the ground, not three feet from where I stood chatting back to him. Many people mistakenly call these goldfinches 'canaries' because of their bright yellow feathers.

A northern shoveler (duck whose male partner has plumage of similar colour to that of a male mallard) has a nest on the ground between the garden and the slough, or dugout as Scott calls it. When I go near, the female flies into the water and pretends to be injured. No babies yet, just eggs. Scott found the nest last weekend when he discovered himself standing in it.
Posted by Blondi Blathers at 2:08 PM No comments: