When I was 11 years old and growing up in Margo, a neighbour girl the same age died after a long illness. Her last name was Hanchuk and all these years later I remember her in the month of her passing. On Wednesday morning I was thinking of her. It put me back in her little bedroom, sat at a wee table with her, tying toothpicks into bundles of 10 for use in arithmetic class. 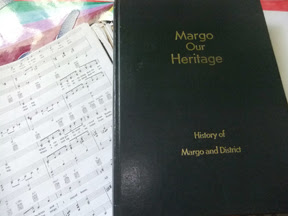 Later that day I overheard that a man whose surname is Hietala has died. He was from my home town and now lived in Wadena. Occasionally I saw him at the café and said hello in passing.

That night I checked my email and found a letter from a woman in Finland. In searching for her relatives who had emigrated to the Margo area in the early 1900s, she had come across my blog and seen photos of the town.

Their surnames?
Hanchuk and Hietala.

I didn't even know those two families were related.

So. Nothing intuitive about this coincidence. No psychic abilities reflected here. It's just one of those coincidences that makes me quizzical, in a pleasant way, as if it's a sign that I'm right at a certain spot in my life that I'm meant to be. Like a reassurance.

This morning I found the Hanchuk and Hietala family histories in the book and scanned them for their Finnish cousin, Merja.

Ralph Goff has left a new comment on your post "Kaddidly Hop":
Reminiscent of "Clem Kadiddlehopper", a tv character I used to watch as a kid. Was it Red Skelton or was it one of Gordie Tapp's characters on Country Hoedown? I guess I need to look it up now.

I remember Clem too. Thought Red Skelton was the best!