Tracks in the Snow

I think a white-tail deer made this track, but hoofprints weren't clear. What's your guess? Anyone? 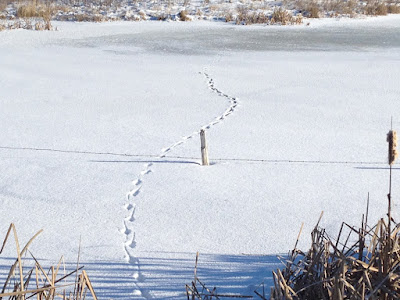 We also saw, Shelly and I upon a walk, the furry foot and bony foreleg of a beast that I believe belong to a badger. I won't show you the pictures I took (because I wanted another opinion regarding the animal's identity). It had paw pads like those of a dog, but claws more than an inch long and slightly curved. There was some fur left on the foot. I didn't think there were predators for badgers, but am told coyotes can kill them.

And there was a large owl in the trees by the yard, but I couldn't get a good photo.