The Haunting of L

There is a TV program called Mystery Ink, where the host interviews mystery writers. From time to time I watch it, although the shows are often quite old reruns. That doesn’t matter; I am still introduced to books and authors new to me.

Lately an interview with Lyn Hamilton made me order a half-dozen of her “archeological” mysteries from the library. It wasn’t till I looked her up on the internet that I learned she has been dead quite a while. I’ve read two of her books now, and have two more waiting on the nightstand. I scan quickly through the historical backstory she includes throughout each novel, the story of the archeological treasures that are the reason people are murdered. Hamilton has done her research, but it is catching the killer that interests me. 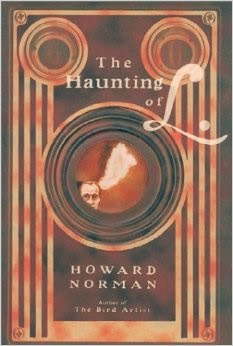 Another book whose plot grabbed my attention is The Haunting of L, by Howard Norman. “What a lovely man,” I thought, as he chatted with the host. "His thoughtfulness; his way of seeing." I had ordered one of his books before — a memoir — but in spite of its dramatic content (a friend had killed herself and her child while staying in the home of Norman and his wife), it had not held me. I left it unfinished. Still, on the strength of this interview, I asked at the library for this other one.

The Haunting of L is a fiction revolving around the practice of “spirit photography,” which was apparently popular in the late 1800s. The image of a dead friend or relative or lover was inserted into a photograph of living people, and claimed to be a real presence. Often this was a comfort to the living, and so it became a way for charlatans to make money.

“In the four-poster bed, my employer’s wife, Kala Murie, lying beside me, the world seemed in perfect order.” The employee is a photographer’s assistant, and Kala Murie always wears two pairs of socks to bed because she is cold from the knees down, although the rest of her body is so warm she often sleeps without any covering at all.

The assistant thinks in captions. He frames everything he sees in this way, so much that it is almost an obsessive habit. Part of my work at the newspaper is writing captions for photographs, and I note that the practice hasn’t filtered into my consciousness, like breathing, as it has for this character.

“I looked at Kala. She’d shawled the bed quilt around her shoulders.” I love it when authors describe things in ways I’ve never thought of. Sometimes so simply, yet so effective.

And that’s as far as I’ve gotten, this Saturday morning. I’ve got the next four days off; dishes to do, other than that no plans or obligations. I’ll bake bread on Monday, but otherwise something tells me this girl will be reading. And I mean to get my papers together to take to my favourite accountant. I’ve been meaning to do that for a month already.

Out on the step, the wind smells like spring.