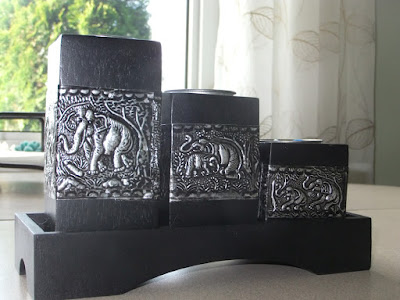 Our kids got home safely from Asia and brought us this lovely set of tealite candle-holders from Thailand. Gunnar was in Wynyard this past weekend for a funeral on the other side of his family, and Scott and his mom drove over to have breakfast with him on Sunday.

Yesterday I had to run to town on business and then, once out and around, figured I might as well zip over to Karen's at Margo. She had one of her little granddaughters there so I got to see them both. We will have a newborn added to the family next week; can't wait to hold the wee darling!

It was one of those days when it's hot in the sun and cool when the sun goes behind a cloud. So when the yard was shady, I went out and pulled weeds and quackgrass from the perennial bed, and when it was sunbeaten, I stayed in and washed dishes and worked a little on the computer. By suppertime all I wanted to do was take a nap, so that's what I did as soon as I could permit myself to lie down.

It was an early night, that's for sure, and I fell asleep listening to the wild exuberance of bird calls just outside the bedroom window. The soras have returned, and they are the loudest of all at this time as I guess they are doing their courting. I keep saying it sounds like a jungle out there, and yesterday there was a call I could've sworn came from a monkey! Also, I've identified one pair of the ducks on our dugout as Lesser Scaups. Thank goodness for the Birds of Saskatchewan book that my friend and mother-in-law Pat gave me when I moved back to this province.

Today's an actual hot one. I've got the sprinkler running over the flowerbed and will be moving it around all day to water the front lawn. I'll be working at the computer. I'll be baking bread and, of course, washing dishes. Scott's out in the field, cultivating. I didn't see him at all yesterday except for when he brought me the last cup of bitter coffee from the pot before bolting from the house. It got me out of bed so was much appreciated. And I was asleep when he came home at dark.

I did, alas, find two woodticks in my hair yesterday and they had both already bitten into my scalp. Little bastards. And they are hard to discover; I had been checking quite carefully, I thought, and been faithfully applying essential oil repellants to my neck and ears and even my scalp - right about where the little bastards had settled in to make a snack of me. "Those don't work," a couple people said, to which I could only reply that we don't know how many ticks I'd've found had I not slathered myself with the oils. However, the oils are obviously not foolproof. Dammit. Today I have two itchy lumps on my head where the ticks bit.

Last week there was an "expert" on CBC radio, talking about ticks, and she said that here in Saskatchewan we are fortunate that the kind we have are dog ticks, not the kind that spread lyme disease. I hope she is correct, because every year I get tick bites no matter what I do, and usually end up taking a round of antibiotics because of infection from them.