Stick to Your Ribs 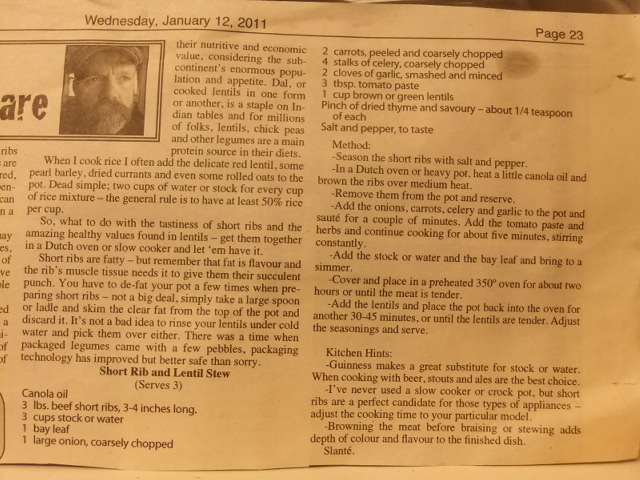 Harvest time around here means those working in the field have one thing on their minds: getting the crop off while they still can. It's a race against rain, frost, snow, and the inevitable machinery breakdowns, and one of the results, if you aren't fortunate enough to have someone cooking for you or aren't organized enough to do it yourself, is that you eat on the run, poorly, if at all before you're falling into bed at night.

Scott eats cold leftovers from the fridge all the time as he makes a pass through the kitchen on his way here or there. I try to help him out by bringing a lot of meat in from the deep freeze to thaw and then cooking it up for supper, which he often doesn't eat till 9.

The other day I brought in something labeled "chuck rib" but, not knowing just what to do with it, I threw it together as the recipe above. I usually like the look of this local columnist's recipes (not to mention his storytelling) and have tried several, but rarely are the results palatable to me when they reach the table. This ribs and lentils one I had made before though and liked (only could get orange lentils in town; if you try it and that's what you use, cut the amount in half or you'll have no liquid in your stew at the end).

When the meat went into the roaster, it filled it, end to end.
After an hour, I was shocked to discover it had shrunk almost in half: 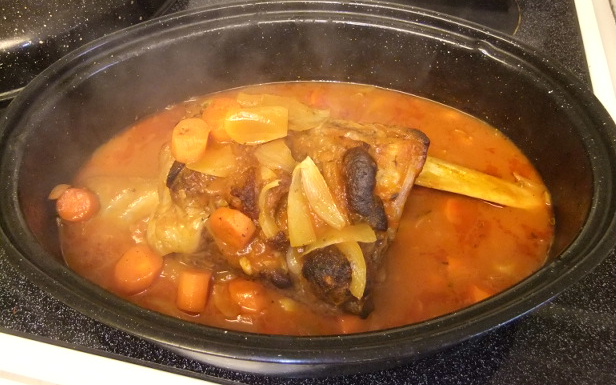 I left the ribs for Scott because frankly I can live without most red meats (unless they're prepared on the barbecue or marinated or otherwise doctored up in some way, I'm not crazy about the flavour; around here we cook a lot of beef roasts because Scott raises organic cattle; but let's just say he eats a lot of it); and the veggies and lentils were delish.

We've given away three kittens and one mother cat so far. If you need some mousers, call me! We have all kinds, all sizes.

Scott's dad Ivan had a pacemaker "installed" on Thursday and is spending a couple days in Kelvington Hospital while they monitor his medications. Scott came in off the field, wolfed down leftovers, cleaned up, picked up his brother and went to visit tonight.

I spent the entire afternoon sleeping off a migraine. Four hours in the bedroom, and two out on the swing under shady trees. Feeling fine now, but with residual fatigue. My friend Cathy, who is a massage therapist, advised me to stop carrying heavy water pails to my flowers because it was exascerbating the knots in my upper back and neck that cause these migraines. So I've stopped doing that in the garden, but haven't completely figured out how to avoid the lifting when it comes to water for the house. We get our cooking water and drinking water in 10-litre jugs and when I'm lugging them to the house I carry one in each hand. That's what I did yesterday with four of them, but paid for it today. And I have to lift them to the countertop when they're full, too. Ah well ... I'll be more careful from now on, and try carrying/lifting only one at a time, and with both hands. I hope that helps. It will mean yet more trips between vehicle and house on grocery days, but if it makes a difference then it's worth it.

Today was a gorgeous day and I hated to "waste" it asleep. Emil spent the entire afternoon outside, either walking around the yard and back and forth down the driveway, or sitting in the shade.
Posted by Blondi Blathers at 9:16 PM 1 comment: