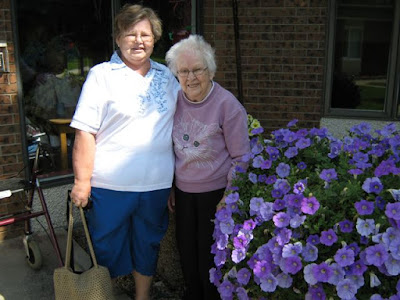 Aunt Reta and Grandma outside the nursing home.

Reta caught a ride to Saskatoon yesterday morning and will fly back down to Phoenix tomorrow. She was here just about a month but it sure didn't seem like it.

Emil and I drove down to Camp Easter Seal on Monday, amid a cold and nasty squall that lasted all day. "I wish we could control the weather," he whined numerous times, "but it's a good thing we can't, or there'd be wars fought over it." No doubt there has been more than one person to respond with a similar statement, and he's got it programmed into his brain now. It's part of the spiel.

Cathy and her daughter Emma met me there after I'd dropped him off and we spent the afternoon and evening in a cabin rental, watching TV and reading, after going out for supper. Yesterday we drove back here and stayed over at Golden Grain Farm. Made a fire and watched the stars and planes and planets, though it was cool and we made an early night of it. They left this afternoon so I guess it's back to the old routine around here till Friday, when I go pick Emil up again. It's been rainy again today but I'm sure he's still having a good time.
Posted by Blondi Blathers at 7:06 PM No comments: