I also came across this exchange between Mom and me. It was probably an exercise from some book, maybe The Artist's Way or something. 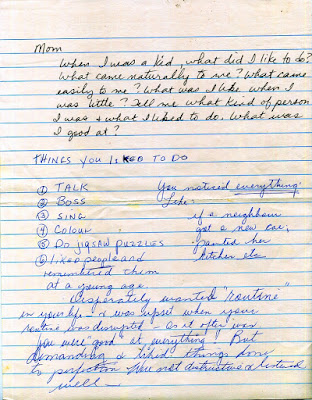 While many things on this list are probably common to most children, some of them are particularly noticeable in Emil; for instance, liking and remembering people and noticing anything that has changed in their homes or appearances, and the insistence on routine. Everett displays some of the demand for perfection.

As a child, Emil loved this painting of the Old Bartley Place, as the family calls it. Built by my great-grandparents, lived in by successive family members over the generations, it has a special place in my own childhood memories. When Emil and I stayed there the summer he was three years old, it hadn't been lived in for a long time but we both loved it there, in spite of the moths and mice! Emil still talks about it and wants to go see it, even if just to drive by.
Aunt Reta's husband Carl painted the house and yard many years ago. Both have gone through a number of transformations since then and the property hasn't belonged to or been lived in by anyone in the family since ... well, since me and Emil 24 years ago.


Last night after going to bed I listened to Michael Enright on CBC radio, talking to a professor OF peace studies over in the United Kingdom. The man said that in spite of the violence we have been seeing in the past 20 years, there are actually more countries living in peace now than there have ever been before; that we have every reason to be hopeful for the future, because there are fewer wars and less conflict than ever.

LISTEN TO THE INTERVIEW
Posted by Blondi Blathers at 11:03 AM 4 comments: