Don't You Care How You Look?


The flower seller, on the left, sold out of glads in less than two hours. And yes, the lady on the right is who you think it is. Senator Wallin's family lives in Wadena so she is often seen at the grocery store and market and various other places around town. She seems like a lovely person, but I think that about most everyone who is pleasant and friendly, and my opinion about her politics and actions is an uneducated one ... like a good many of the opinions we hear. Not knowing all the facts doesn't seem to shut anyone up, unfortunately.

My great-aunt Marj, age 88, has two baking and garden produce tables at the market and her son Allan helps her lug everything in and then serve the hordes of hungry customers who swarm her tables when the doors open at 10. That's Allan on the right:

When they were leaving after the Saturday market, he told me that his mother was taking him out for a meal and I teased him that he was spoiled. "I can't help it if she's good to me!" he said with a big smile.

This week was another hot one and I went along with Scott to a job site a couple times to do what I could do. I am nervous on a ladder so am not much good for half the work; I do a lot of cleanup (Scott likes a spotless work area) and fetching ("What do you mean, a -blank-?" I don't know what all the tools are called). It has been a strong reminder that a good carpenter is no dummy. The fractions! the figuring! the troubleshooting! I'm all in awe, watching him puzzle out the proper handling of some small detail that, although the average observer like myself isn't even aware of it, if not done right it will create a costly mess down the line.

One day I closely observed him making aluminum cladding for windows, as it's something I could learn to do; he didn't let me get my square little hands on the tinsnips though: 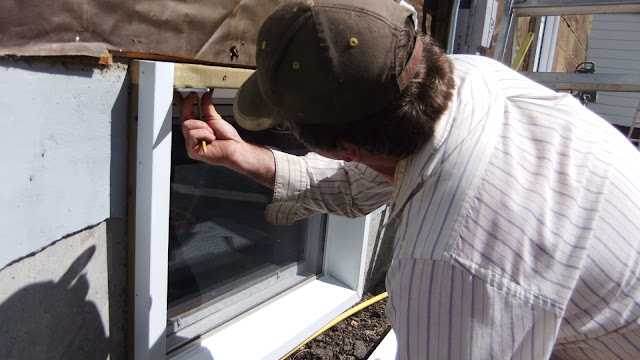 I did pound some nails into styrofoam sheating, and he chuckled and said I "hammer like a girl."

Apparently he does still think I'm a girly-girl (and let's be honest, twice this week I've jumped and screamed and clasped my hands to my breast when he appeared in a doorway and I was expecting either Everett or no one, so no wonder)(does that happen to anyone else?), because when we got home I had to go to town to pick up Everett and a few groceries, and I headed for the car without changing — wearing a man's white cotton shirt and baggy faded blue jeans held up by a belt with notches added so it cinches tight enough to keep my pants up; they were hand-me-downs from a slightly larger gal to start with, and I've gotten thinner since then — I have been saving old wornout favourites for years so if ever needed I would have work clothes to wear, and finally I get to wear them! — and he says, "You're going like that? Don't you care how you look?"

Uh, no, I don't. I've been working outside, and I'm going to town looking like I've been working outside. Is that a problem? (Scott usually "cleans up" before going to town, but then he's often been working with cattle; I'd likely wash and change then, too.) I was surprised by the questions, because he should know by now ... that I wash, and brush my teeth, and that's about it. I might wet down my sticky-up hair when I get up in the morning, but there will be no curling or blow-drying or time spent fussing. Been there, done that, wasted a hell of a lot of time when I was a young woman. I haven't put makeup on my face for at least 10 years and now wonder why I ever bothered. I think it was a way of paying myself a couple minutes of attention, which my body appreciated. Now I do that by applying coconut oil or a natural face mist on my way out of the bathroom, and my body is just as happy.

In actual news this week, my friend Bev, who was diagnosed with breast cancer this spring and chose to treat it without surgery, chemotherapy, or radiation, has posted the results of her pet scan: