Gawd, I love Saturday mornings. Sleeping till I feel like getting up. Reading till I feel like doing something else. Sipping on my coffee, not hurrying to eat breakfast, not getting out of my housecoat so I can go to town. Sigh. Every morning should be Saturday morning. Especially when the sun is shining into the windows like it is today.
It’s just me and The Duck home. He’s curled up on a fluffy blanket in a cosy corner beside my desk here. After two rounds of antibiotics and antihistamines, during which he virtually stopped scratching, he is back at it again. So we don’t know what the hell is going on.
It's probably going to require another ridiculously expensive trip to the vet (an hour or two from here), which may not solve the problem any better than the first trip did, right? Or so logic tells me, because whatever the vet could do this second time, he sure as hell didn’t do the first time.
And why not? Let’s assume it was to be a process of trial and error. Cut out the commercial dry food Ducky had been eating, replace it with a super-expensive vet-recommended kind, and see if that could’ve been the cause. Nope, apparently not. And it isn’t likely a bacterial infection, or the second round of drugs should’ve knocked it out. 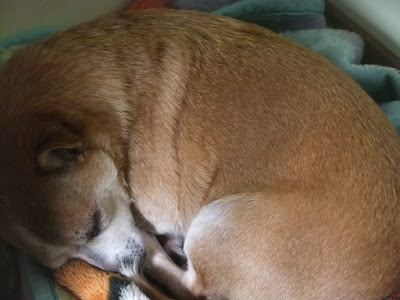 If he’s got some kind of mite, then why would the antibiotics and antihistamines have given him relief? And we can’t keep him on drugs forever; that can’t be good for a dog any more than it’s good for a person. So it’s a mystery, and probably he’s developed an allergy to something in our house. But what? That is the question. What?
Could it be the egg that Scott has begun to fry up for Ducky in an attempt to get him off one of the commercial soft foods that has been a daily part of his diet? Maybe the company changed its recipe or something. Or was the egg thing begun in response to the scratching? It’s been so long that I’m not sure of the details. This has been going on since well before Christmas.
The dog is also getting quite a bit of fresh meat now, both raw and cooked.
The scratching may be driving Ducky crazy, and it is doing the same to Scott and me. When Ducky starts scratching during the night, I say in a totally normal tone of voice, “Stop that.” He gets up and goes out to the living room to do his scratching.
I swear, he understands English.
Also, Scott notes that if Ducky is lying with him on the couch, he doesn't scratch for hours. He seems completely content. Why would that be? Could the dog have developed a psychosomatic itch due to being alone too much lately?
Your ideas and intuitions are welcome.