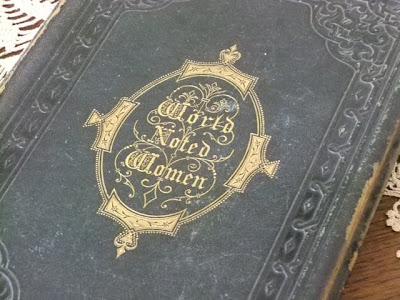 Uncle Carl gave me this old book, published in 1857.
It is laying, for now, on an old crocheted doily (made by my grandmother sometime before 1966) on an old table (probably a wash-table from back in the day) next to my grandmother's old leaden candlesticks and an old oil lamp.

Carl remarked that if you look at the drawings of all the women mentioned in this book, you notice that they all look strangely the same: 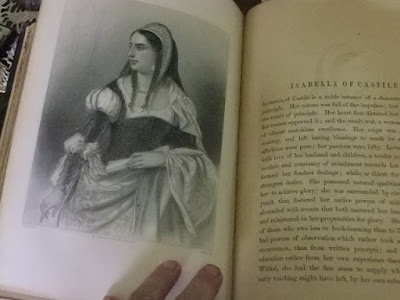 In other news, we've had rain and grey here again, but yesterday after school Everett mixed the last of the peat moss with some black soil and filled the last of my pots and voila I got the last of my flowers planted. So it can rain all it wants, as far as my garden is concerned, although yesterday at noon I scooped up, with a dustpan, one-and-a-half five-gallon pailsful of water from the basement floor. If it rains more ... oh it hardly bears thinking about.

And in yet more news, I've had a letter stating that one of the local group homes has a bedroom for Emil on September 1st. Thus I begin the slide into Empty Nesthood. Everett writes his final exams next week and then we are through with public school once and for all. He has no plans beyond going to Gord's (his dad's) for the month of July, so I'm not sure when or if my nest ever will actually be empty.

And speaking of nests, yesterday as I stood on the deck and looked out over the slough (that's pronounced SLOO, for those who don't know) I saw a mother duck on the water, followed by a train of about six fluffy little ducklings. The simplest and most common things give me the greatest pleasure.
Posted by Blondi Blathers at 10:13 AM 8 comments: