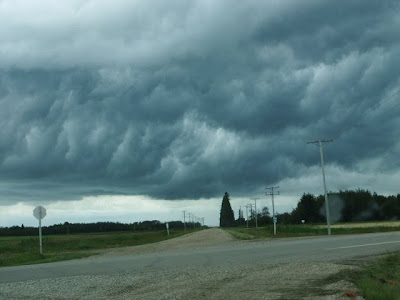 This photo was taken through the windshield as Everett and I were on our way into town on Friday afternoon. I considered turning around and coming home, but ... as is often the case, when I've a goal in mind, it's almost impossible to deter myself from it. So on we went. It was to spend a couple hours at the laundromat, since we have no facilities at present except those at Scott's parents' place, which requires three trips for every load of laundry by the time you've put it into the washer, moved it to the dryer, and picked it up again. I prefer to get it all done at once and get it over with. Sure it costs $20 but four huge loads are done in two hours. I can live with that.

We'll be buying a new washer and dryer, but not until water-in-the-basement problems are dealt with, and we've installed a new water-treatment system so that heavy iron and minerals don't ruin the appliances. Because the groundwater level is so high, it isn't possible to dig a hole for a septic tank yet. And so we wait for the rain to stop and things to get back to normal. It's starting to seem as if they never will. But at least we haven't had to face the disaster that is occurring in China and Pakistan. That is horrible and we are fortunate by comparison.

The nasty cloud carried on away from town, but the sky did dump rain for several hours and only today is the sun out again. At the moment I hear through my office window a pump running, working at lowering the level of the water in the dugout, which connects to a slough, which has been running over and into the lagoon, which, if nothing is done about it, will end up in our basement. Or so I hear.

Acreage living is lovely. It's not without its problems, but they aren't much different than town dwellers get their fair share of. When they get sewer backup, it's not just their own sewage. I imagine that's even worse to think about when you're cleaning it up.
Posted by Blondi Blathers at 12:54 PM 4 comments: 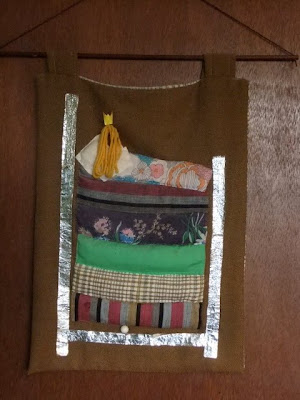 The Princess and the Pea: Mom's first quilting project, which now hangs on my bedroom door.

Not only does this hanging have sentimental value because Mom gave it to me and went on to become an expert quilter — so much so that she always tried to get me to throw this wall hanging out, as she was embarrassed by it — but because I recognize the material that makes all the mattresses: a bedspread Mom made, two of her dresses, and a pair of Grandpa Johnson's pants. And at the time the hanging came my way, I had that long blond hair.

We have more water worries, after a week of heavy rains. I was actually wearing Emil's rubber boots (my own are only ankle-high) out shovelling in a grass- and water-filled ditch for a while today, trenching so that water could get away from our yard. Will this rain never end? Scott said he saw a rainbow, today, that looked like it was painted onto a cloud -- that's how bright it was.

Shoot, it's late, nearly 1 a.m.
Think I'll make like the princess and climb onto a mattress.
Posted by Blondi Blathers at 12:42 AM 2 comments: