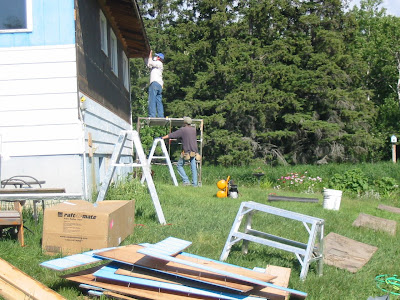 Boys sure know how to make a mess.

They have to keep an eye out for their hammers though, because Puppycakes gets bored with no one to play with.

See that scaffold? It's not very high, but if I had to climb up on it I'd break out in a sweat, and if I had to work on it I'd work with one hand only, as the other hand would be hanging onto something for dear life.

Yesterday Scott and Devon put in a long day and were at it again early this morning. They've got good weather for it— sunshine with breeze, so it's not too hot.

When Devon first came down from the north (Flin Flon area) where they don't have woodticks (yet; we never had them here 40 years ago either), he did quite a bit of that little jig that my sister Joan was doing when she visited. Now he's used to it and takes it in stride; probably because the ticks don't seem to like him anyway. Lucky b__t__d.

Emil is shaving so he can be ready to go with me to the house concert in town this afternoon at three o'clock. I'm going to do some work on the computer and a little kitchen cleanup (neverending) and start a chicken cooking before we leave, so the men will have something ready for supper.

He Who Must Not Be Mentioned on My Blog figures it's time he bought a razor, since his chin is covered with peachfuzz. Cute.
Posted by Blondi Blathers at 12:41 PM No comments: