Why the Laundromat, you ask. 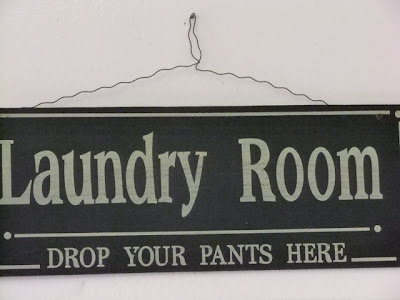 I felt sorry for people I saw hauling their bags of dirty clothes to a laundromat, assuming they couldn't afford a washer and dryer. Now I realize there are a myriad of reasons why laundromats are a profitable business.

1. GGFarm uses a lagoon for its water and sewage disposal. Everything goes from the house to a deep hole in the ground some distance away. In 2007, this entire area of Saskatchewan began to experience widespread flooding that hasn't been seen around here for more than 50 years. This summer we got record-breaking rainfall. As a result the groundwater level is extremely high and our lagoon is constantly overflowing. Scott has to pump the thing out every other day. It's a real pain in the ass. We intend to fill the lagoon in and install a septic tank to solve this problem, but because of the water level this year it hasn't been possible to dig a hole; it would fill with water before you finished digging. Also, we have a foot of snow on top of ground that hasn't frozen like it normally would have by now, so imagine bringing the heavy machinery in; it would make a hell of a mess. Short story long, if we start using a washing machine here, the lagoon will need to be pumped more often than it already is. My poor Scottie is already pulling his hair out, particularly now that it has gotten cold and he has to chop a hole in the ice to put the pump in and remove it so that it doesn't freeze in— ice that isn't thick enough for him to stand on, yet, in a deep watery hole with steep sides.

2. the well water contains so much iron and sulphur that we need to change the old water lines and install a water treatment system in order to protect the washing machine from ruination. Scott's been researching treatment systems, trying to decide what's best and where to get the best value for the dollar. At the moment there is water coming into our basement as there has been since spring (due to the level of groundwater and the lack of rebar put into the concrete when the house was built) and though he plans to break the concrete out and install rebar and then change the plumbing lines, he prefers the water to stop coming in first. Something like that. I hope he doesn't end up bald.

Whatever amount of money you throw at this water project, it still can't feasibly be done with the groundwater level as it is. We are between the proverbial rock and hard place.

Another reason people frequent laundromats: to wash things they don't want to fuck up their own washer and dryer with. Oily workclothes, etc.
Once something like crusty black ink burned onto Emil's duvet. Recently my black cords came out with a glued-on plastic lint; I threw the pants right back into the hamper but the plastic remains after another wash.

Mom's bosom buddy Joanne wrote us a letter today; see Out Margo Way in the column on the left.
On Everett's page he put up a short video from Rooster Teeth Productions.

Kate from NY said:
$1,000 for oil...how much do you get at one time? We've only got a 275 gallon tank and it runs about $400 per fill.
Kate, we have a 250-gallon tank and when empty it costs about $1200 to fill. Ours was down to a quarter or less and we had it filled to the top, and expect to use about one-and-a-half tanks over the winter if temperatures are typical. The house is less than 1000 square feet, has new windows all around and Scott reinsulated the attic and walls; before he did that and we got the new furnace in, we used about three times as much oil I believe. And that's when we weren't living here yet and kept the thermostat set around 50F.
Posted by Blondi Blathers at 11:47 AM 6 comments: