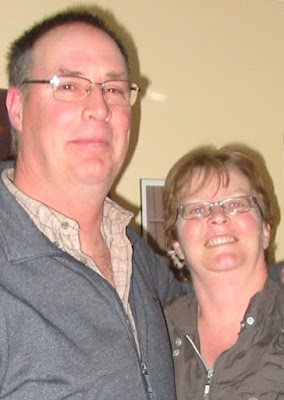 Rick and Faye, or, as Scott calls them, the L-BOs.

With luck I won't be in trouble for posting this. Some people hate almost all photos of themselves, so you never know.

We had another fantastic meal at their place last night; saw a white-tailed deer with a huge ("trophy," Scott said) rack on the drive over. By 11 we were all yawning and Scott and I made our half-hour way home on the gravel roads at about 40 kph.

I always think of Uncle Bob, my great-uncle, when I drive that slowly. He drove a little Toyota and was never in any hurry. In my twenties I could not understand why on earth he'd putz along at such a snail's pace; it was an old-people thing, I assumed, glad I didn't have to ride with him.

Now I get it, though I'm still decades younger than Uncle Bob was. What's the rush? It's that simple. During the day I enjoy the scenery, and after dark I'm listening to the radio and singing along.

It could be that last night I'd had one too many shots of sambuca ... or maybe it was that paralyzer I polished off before we left. I hadn't had a lot to drink but as I'm not a heavy drinker it may have affected my reflexes. At any rate there was no reason to be speedy, especially when a deer or moose could dash out of the ditch at any moment.
Posted by Blondi Blathers at 12:20 PM 1 comment: