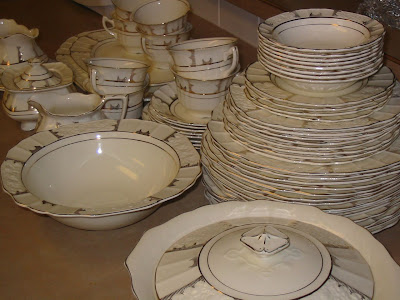 Resting on my butt for a few minutes while onions sauté for the cheese soup I'm making. A good time to make a short entry.

When Dad came out from Kelowna for Bruce's memorial, he brought me the above set of dishes, which belonged first to his mother and then to Dad and Mom. Out of curiosity she had asked me five years ago to poke around on the internet to find out what they're worth. I had no luck then, but this afternoon I went to eBay to try again. Not that I'd part with them, you understand. I've even managed to make room to display them on the shelves of our little kitchen.

Again I was unable to find these particular dishes online, but I did end up with lists of Princess House crystal for sale and when I saw a couple good deals, figured I'd try to pick up a couple things I've wanted for a long time but are no longer available as new items.

Learned a good lesson when, as highest bidder for a tabletop knife-holder (I won the auction for tabletop spoon- and fork-holders several minutes earlier), the countdown to the end of the auction was down to five minutes and as I watched the seconds tick away I thought I should be prepared to raise my bid at the last moment. I put my cursor in the bid box, ready. With 10 seconds left to go, the other bidder topped my bid by 50 cents and I missed beating the new bid by one second! Next time I'll have that bid box filled out and my finger hovering over the "Enter" key. Hmph.

***Aunt Reta just told me these dishes were on the head table at Mom and Dad's wedding supper. Nice to know. How lucky am I to have an aunt who knows all these interesting tidbits and thinks of telling me?
Posted by Blondi Blathers at 7:07 PM 3 comments: